**Due to trade bans in the following states we are unable to ship mammoth ivory dice to California, New York, New Jersey, Illinois, Nevada, New Hampshire, or Hawaii. 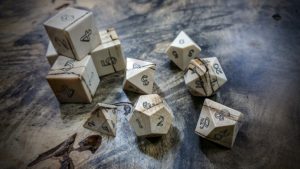 Mammoths were huge, wooly, tusked beast that went extinct around 10,000 years ago. Though, a small population did survive on a remote Arctic island until about 6,400 years ago. Mammoth bones were first discovered in America by European explorers, though they were erroneously identified as bones belonging to giants that lived before the biblical flood of Noah. It wasn’t until African slaves were brought to America that Wooly Mammoth bones were correctly identified as being a type of elephant. 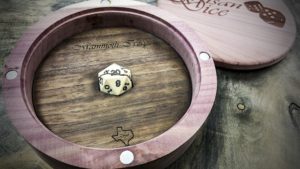 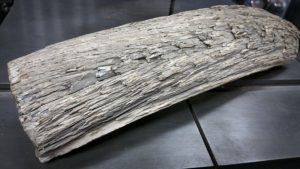 Mammoth Ivory has some very unique characteristics hiding within its aged and flaky bark. The inner layers polish to a brilliant luster that showcase a wonderful grain in the form of a subtle cross hatch pattern, and distinctively heavy weight along with a crisp sound when rolled as a die. On top of all that, it produces one hell of a stink when worked. It’s by far one of the worst smells in the shop. Enduring that pungent aroma is well worth the results though as Mammoth Ivory makes some of the best dice on the planet.

Each Mammoth Tusk order comes in its very own Mk X box crafted from Eastern Aromatic Cedar and completed with a Black Walnut insert. Due to the extreme age of Mammoth Ivory it does exhibit some cracking and patina. We have left this intact on these dice while ensuring every age acquired crack has been carefully filled, preserved, and stabilized so these dice will last another 10,000 years while retaining their aged beauty.

Our Mammoth Tusk d20s include a Certificate of Authenticity attached to which is a sample chip of the tusk which was used to craft the dice should any testing be required by customs to prove the die is made from actual Mammoth Tusk.

**Due to trade bans in the following states we are unable to ship mammoth ivory dice to California, New York, New Jersey, Illinois, Nevada, New Hampshire, or Hawaii. 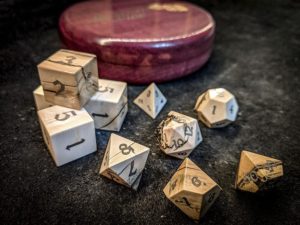 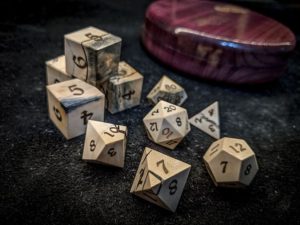 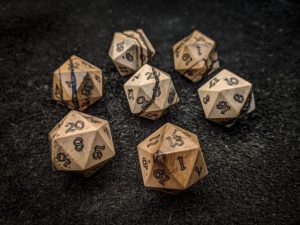 Mammoth d20s – Made to Order 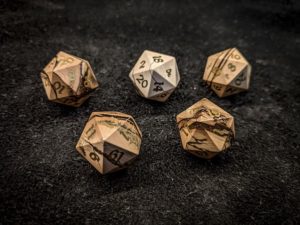 Mammoth d20s inlaid with Brass – Made to Order 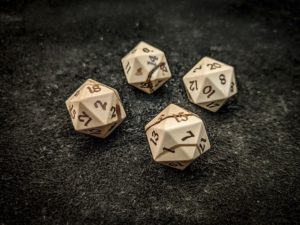 Mammoth d20s inlaid with Copper – Made to Order 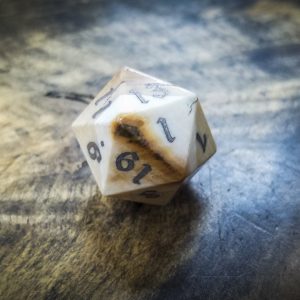 Mammoth d20 with Silver Inlay – Made to Order 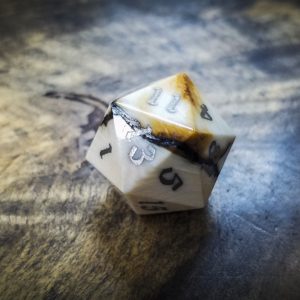 Mammoth d20 with Nickel Silver Inlay – Made to Order 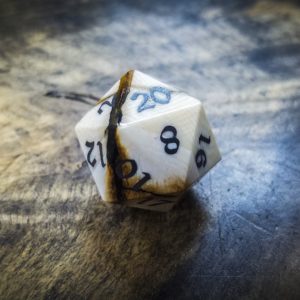 Mammoth d20 with Iron Inlay – Made to Order 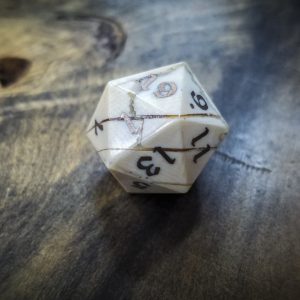 Mammoth d20 with Bronze Inlay – Made to Order 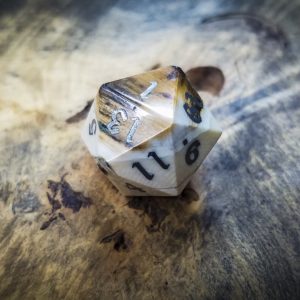 Mammoth d20 with Stainless Steel Inlay – Made to Order