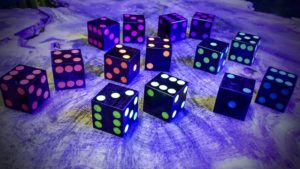 Aurora Borealis is one of the most hauntingly beautiful sights in the world: a vivid high-altitude electromagnetic storm of charged particles dancing before your eyes with a captivating glow. Few sights in nature can compare with Aurora Borealis’s beauty. We’ve captured a tiny bit of the Aurora’s magic and placed it within our latest creation, The Aurora Inlay. 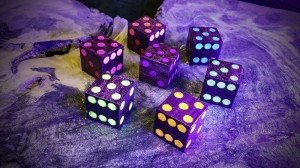 Just how did we manage to fill these dice with such an unearthly glow? Through an unholy pact with a denizen of the Daemonic underworld, known as molecular physics, the secrets of special range of pigments were made known to our resident Alchemist. These pigments work on similar principles to the Aurora Borealis, just on a much smaller scale. Whereas the Aurora is a display of electromagnetic beauty resulting from a stream of charged particles sent crashing in to the Earth’s magnetic field by our Sun, the special pigments used in the Aurora Inlay have a unique ability to react with the sun’s constant stream of photons in multiple ways. 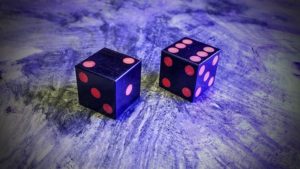 The human eye can perceive light that is emitted in wavelengths between 390 to 700nm. This makes up the roughly 10 million different colors of the visible light spectrum. The first part of these specialized pigments in our Aurora dice react with this visible light spectrum, giving the pips a neon color under normal day light. 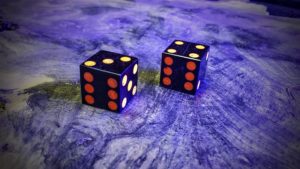 But our sun emits light beyond what we can see with the naked eye. Wavelengths stretch into the infrared spectrum on the low end, less than 390nm, and into the ultraviolet spectrum, greater that 700nm, on the upper end of the light spectrum. These pigments also take advantage of those photons traveling along the ultraviolet spectrum to fluoresce, taking that high energy ultraviolet light and remitting it in the visible spectrum with that trademark unearthly glow. 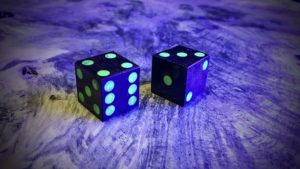 In a process called phosphorence, Aurora d6s take a tiny bit of that high-energy ultraviolet light and excite some of the pigments’ electrons into a higher-energy state called the triplet state. Electrons can stay in this triplet state for quite some time. When they finally return to their normal non-excited state, they emit photons within the visible light spectrum, allowing our Aurora d6s to maintain their haunting glow in complete darkness. 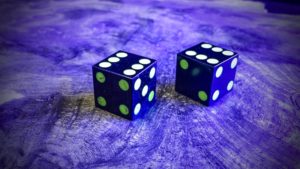 The Aurora Inlay adds roughly nine and a half grains to the weight of an die. We have seven different colors available in our Aurora Inlay as well as eight different stone inlays.  You’ll find the inlay options in the drop down box located on each of our Druid’s dice pages.  Below you will find a complete list of Aurora Inlays we are currently offering. 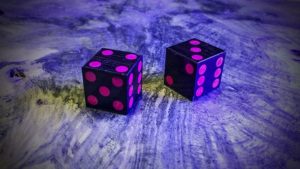 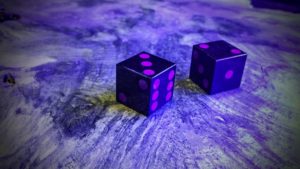 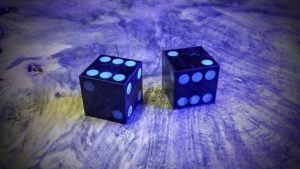 For a limited time you can get a free Big Ass d20 with all orders over $150! Just enter code 'SuperSizeMe' at checkout! Dismiss