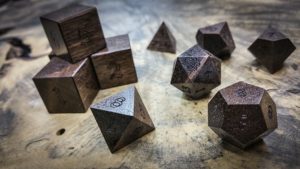 Caranda is beautiful cool brown with tan iridescent streaks and contrasting black specks. Thanks to its a fine texture and durability, Caranda is often used in hardwood floors. When freshly worked it emits a noticeable aroma much like sandal wood that fades rather quickly. Caranda  stands as the densest, hardest, and strongest of the mesquite species found in the Prosopis genus probably due to it’s slow growth rate in the arid climate of the Gran Chaco region of Brazils. Some pieces can be quite darkly colored and dense, and is has been suggested as an ebony substitute.

This South American Palm produces beautiful white flowers and a fruit called Karonda/Caranda Fruit that resmbles a plum. Also called a Lace Fruit or Christmas plum, this fruit is said to have a sweet/sour taste, along with an array of health benefits.