Alabaster is a stone that has been used for centuries to create finely crafted sculptures. Alabaster’s first use was as a gem stone in ancient Egypt and it derives it’s name from the Egyptian word a-labaste, meaning a vessel of Bast. Bast is an Egyptian god often depicted as a lioness in Alabaster figurines. 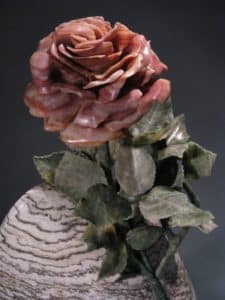 Alabaster is still used today in modern works of art like this Alabaster Rose carved by Susan Zalkind.  This is due in part to polished Alabaster’s soft luster, the myriad of colors it can be found in, and the ease with which it is worked.

In this first run of Alabaster dice I used two different colors. A neutral gray Alabaster and a ivory colored warm toned Alabaster so you’ll be able to choose which color you’d like below. Unlike last weekend’s soap stone project, the engraving on these Alabaster dice is readily visible.