It’s been a year already?! 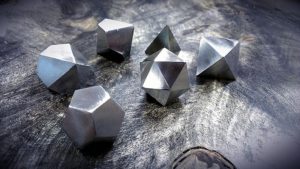 One year ago on this very weekend, I gave each person in my gaming group a set of fudge dice. In return they got me drunk, and in a fit of alcohol induce inspiration, convinced me to launch a kickstarter for six-sided wooden dice. I launched that project asking for $300, and expected to have a tough time raising even that much cash. Much to my surprise we raised over 5 times that amount in the first 24 hours, and when the dust settled 30 days later we had raised well over $90,000 with near enough 1200 backers. I wanted to thank each and every one of those 1200 folks. Without their support Artisan Dice would not exist. Thanks to our awesome backers and our nearly rabid facebook fans, I have the coolest job in world.

So to celebrate the end of a whirl wind year, and the upcoming launch of our next Kickstarter project on Monday, March the 11th, we’re giving away a ton of stuff this weekend. Included the very first machined stainless steel polyhedral dice! These are the very dice we used to R&D our new metal dice line back in December. And yes they will be engraved later today so they will have numbers before you get them ;). How do you win these historic dice? We’ll first you need to head on over to our facebook page and share this post and like our page to help us get the last 500 fans to break the  5000 follower mark  before 12:00am CST on Sunday March 10th. We’ll announce the winner at midnight shortly before officially launching our Polyhedral Project on Kickstarter. For those of you without facebook you can comment on this post to enter. If you have facebook we’d much appreciate you entering there to help us spread the word.

Now giving away a single set of dice just isn’t our style. Artisan Dice was started with the idea to give freely and give often so our facebook fans all know that when we give stuff away, we give away a ton of stuff. So while we finish up the last of the original Kickstarter orders this weekend we’ll be posting up sets of dice for you to win periodically. All you’ll have to do is participate in some fun competitions and help spread the word about our new polyhedral Kickstarter by sharing this post. If we can fund our project in the first 24 hours, we’ll be giving away one set from every single backer level to our facebook fans since we know that as awesome as Kickstarter is, not everyone can participate in the fun.

The last thing we are doing to celebrate our first anniversary is to give each and every one of our customers 15% off of everything we make for the entire weekend. All you need to do is enter “ilikedice” as the discount code when you checkout.

So head on over to our facebook page and help us celebrate our 1st birthday and win some very cool dice in the process!

60 reviews for It’s been a year already?!