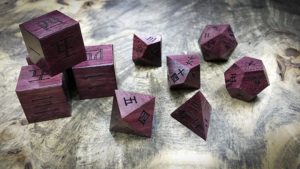 Want a set of your own with Kanji engravings? Send us an email at contact@artisandice.com for a customized set.

This is the inital run of specialty numbered polyhderal Druid’s Dice and single d20s in assorted woods using that have been numbered in Kanji. This ancient numbering system is still in use in Japan and China. Kanji was brought to Japan during the 5th century AD when the Chinese scholar Wani arrived in Japan as an emissary during the reign of Emperor Ojin. In fact the literal translation of Kanji is “Han Characters” or “Chinese Characters”. Now-famous Japanese mathematician Seki Takakazu used a combination of Kanji and a much older form of Chinese numbers called Counting Rods to make several advances in Eastern Algebra. 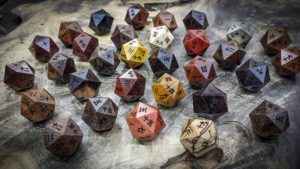 Kanji numbers are read a bit differently once double-digits are reached. The symbols  十一 would be jû ichi, which translates roughly as ten and one, whereas in English we would say eleven. The number 20 in Kanji is written as 二十 or ni-jû, roughly two tens. Anything past the number 20 is a bit out of the scope of this article, so if you want to read more about Kanji, head over to Omniglot, which has information on different languages and numbering systems.

This limited introductory run of nine sets of Kanji Polyhedral Dice and roughly two dozen single d20s were crafted out of more than 12 species of wood. 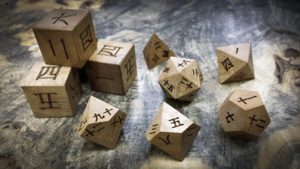 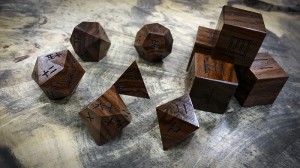 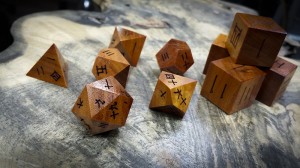 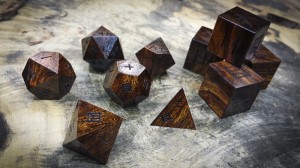 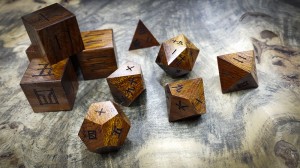 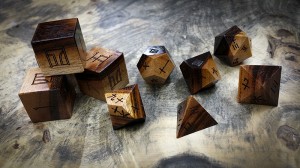 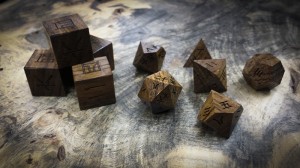 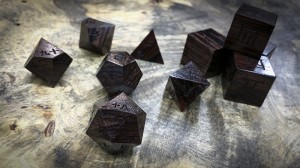