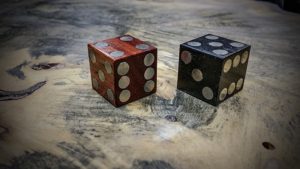 Let me start off by stating the obvious. Magnets are cool. Insanely cool. From the hard drive in your computer to the magnets in our dice boxes and even super cooled quantum levitating race tracks, magnets are used just about everywhere these days. Magnets are not just the new hotness. They’ve been around for roughly 2500 years. 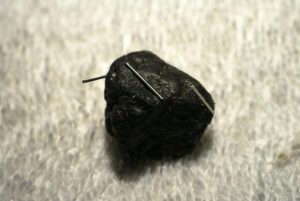 We humans have been enamored with these chunks of metallic gravity deifying awesome sauce since roughly 500 B.C. whene they discovered in Greece. The first magnets were actually stones called lodestones. Lodestones are chunks of the mineral magnetite, a naturally occurring magnet. The lodestone’s attraction to iron was first recorded by Pliny the Elder, a famous Roman scholar who penned the encyclopedic work, Naturalis Historia. Then some time between the 9th and 10th century A.D., some enterprising young Chinese Navigator used the lodestone to make the first navigational compass. Sea faring would never be the same. 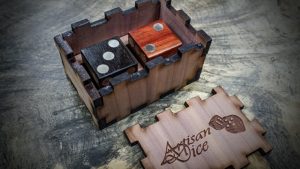 These first run pairs of magnetic dice were crafted using bloodwood and mpingo then inlaid with a rare earth neodymium magnet for each pip. The neodymium magnets add roughly 32 grains to each die over their non inlaid counter parts. These dice don;t roll like anything else you’ve played with. The magnetic fields of the pips interact with each other to push and pull on each die with they are rolled. If you roll these dice on a metal table, they stop with authority after only 3 or 4 flips. Each pair of dice comes in a numbered, laser cut, Eastern Aromatic Cedar dice box.