Manzanita Burl comes from the Manzanita Tree a blood-red scrub tree native to the chaparral regions of Western America. The Manzanita tree has over 106 species native to the U.S. Over 90 of those species are endemic to the mountainous regions of North Central California. The vast number of species is due in large part to the areas in which the Manzanita tree grows. The trees were easily cut off from each other by terrain resulting in numerous species of Manzanita trees evolving in a relatively short amount of time. 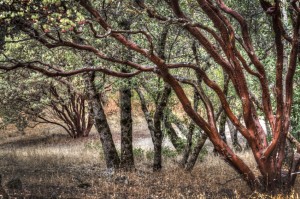 Manzanita tree received its name from the first Spanish settlers and is a derivative of the Spanish word manzana or apple. So roughly translated Manzanita  means “little apple”. Probably owing to the small tart fruit the tree bares in the early summer months which can brewed in to a cider. The trees are easily identifiable by their smooth red bark, and gnarled stunted growth.

Manzanita wood is brick-red in color, with a cream-colored sap wood. The burls form under ground and are what is known as a root burl. Manzanita is ridiculously hard to dry and warps and cracks with a vengeance. So it is not commercially available. I received a few manzanita burls in trade from a fellow wood worker. He warned me about their tendency to collect dirt and stones while they grow. I though he was just over exaggerating until a hidden rock caused my freshly sharpened bandsaw blade to start throwing spark half way though a cut. Turns out that’s a pretty sure-fire way to get a fat bald man to spew a rather fanciful string of obscenities. 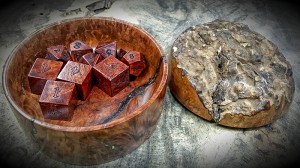 In addition to having their own in-built collection of rocks, Manzanita Burls are extremely hard, and very dense. In spite of that it is a wonderful wood to work that takes on a fantastic polish, and the interplay between the brick-red heart wood and the creamy sap wood is truly amazing. In North America we have very few exotic trees. Manzanita is definitely at the top of that very short list.

In addition to a full set of Manzanita Burl Polyhedral dice, I also turned a lidded natural edge bowl to store the dice in, as well as turning a matching Scribe pen and pencil set. The bowl has enough room to hold a second set of dice, while being small enough to fit comfortably in a back pack with the rest of your gaming gear. The natural edge of the burl was maintained for the lid giving a stark contrast to the highly polished bowl and showing that much like burls are a lot like geodes. They may not look like much on the outside, but they real beauty is captured within.