Tungsten, derived from the Swedish, tung sten which literally translates as heavy stone. Tungsten is also know as wolfram  so named for the ore, wolframite, in which it’s found.

But why two names? Because Germans. First discovered in Sweden by Carl W. Scheele, it was aptly named  heavy rock in Swedish, from which we get its name through out most of the world, Tungsten. On the other hand we have Germany, who quite logically insisted on calling it wolfram since it was found in the mineral wolframite. So today there is a bit of a compromise. To appease those perfectly logical Germans, tungsten as the elemental symbol of W, and the rest of the world just ignores the fact they insist on calling it by the wrong name.

These are the most difficult dice we make. Tungsten Carbide is insanely difficult to machine and it chews through our tooling with reckless abandon because it is made from the same material as our tools.

Machining this material is not for the faint of heart. Its an angry unforgiving beast that’s not easily tamed. The results speak for themselves though.  Nothing feels quit like dice. They are the heaviest dice ever crafted and after picking one of these up, nothing else seems to feel quite right.  Their density is a something that just has to be experienced as its nearly impossible to convey thorough mere words. These dice seem to have an extra presence to their reality.

Science and Lasers Oh My!

Unlike other metal dice on the market, our Dragon’s Breath Dice receive their numbers at the very end of the crafting process. This makes for incredibly crisp and hyper-contrasted numbers. They are engraved with a laser ablation process. Which is a fancy way of saying we blast the surface with 1.21 gigawatts of laser beam awesome sauce that vaporizes the Tungsten Carbide in to its constituent components leaving behind an ultra polished number recessed a few thousandths of an inch deep. This process leaves the perfect balance of the underlying platonic solid completely intact, unlike machining away a deeply recessed number. 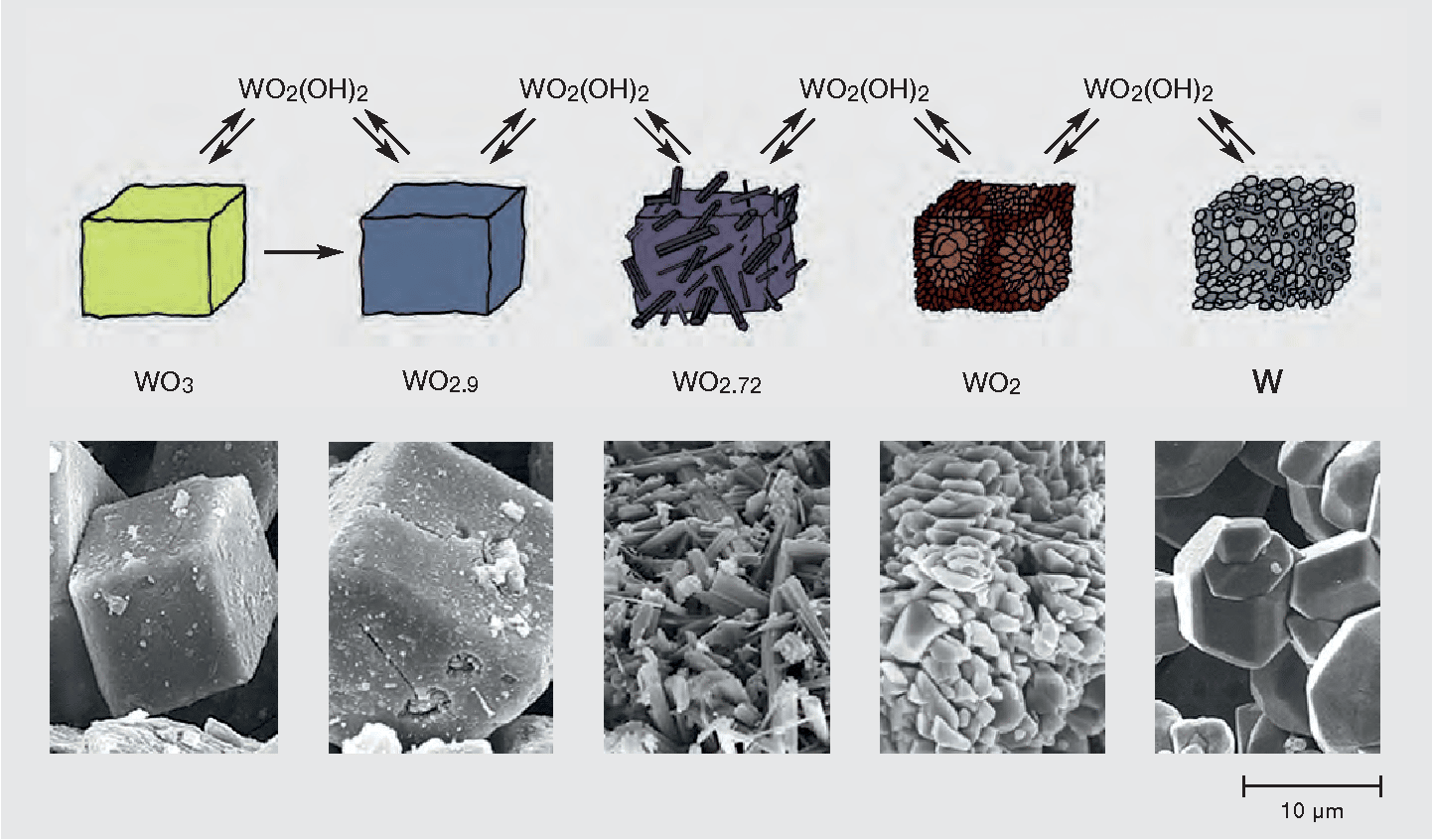 Tungsten can not be refined like other metals, since you know, that whole hotter than the surface of the sun thing. Instead Tungsten is extracted from ore by a length chemical process you read about here.

Suffice to say that process yields some stunningly vibrant oxides than can then be broken down in to pure tungsten powder.

That pure tungsten is ready for the dice life just yet. Nope we don’t use the metallic form of Tungsten, we make these dice from an incredibly tough ceramic called Tungsten Carbide. Carbides though are typically alloyed with cobalt through a process called sintering. Sintering occurs below the melting temp of the base metal in this case, tungsten. For our purposes though we use nickel as it gives us the ability to obtain a higher polish and is less reactive with skin allergies.

This ceramic metal is now the super metal we crave! It has everything we could dream of in an ultra heavy dice. A super hard surface for durability and a long lasting polish. (Seriously this stuff is nearly as hard as diamonds coming in on the mohs scale at a mind boggling 9.5 out of 10.) Its super tough so it won’t crack or chip like pure tungsten can. Also you remember those oxides from earlier?  Those give us the extra kick in the colors we can achieve with our Dragon’s Breath Finish.

Like all of our metal dice our Tungsten Dragon’s Dice receive our signature Dragon’s Breath Finish. This is a heat anodization process applied by hand to each die. The artisan’s skill here is showcased in the bright vivid coloration unique to each individual dice. This coloration will range in a pattern of hues from golden bronze, through a deep violet, to royal and sky blues.

Just how are we able to attain such a vibrant color pallet? Through science of course! Our Dragon’s Breath process involves an exceedingly intense flame, over 3,700 degrees Fahrenheit to be exact. Under this blast of pure distilled draconic hate, the base metal undergoes a surface transformation by reacting with atmospheric oxygen. This reaction forms a *not quite* clear crystalline oxide layer that gives us the radical greens, turquoise, and purples these dice are know for. 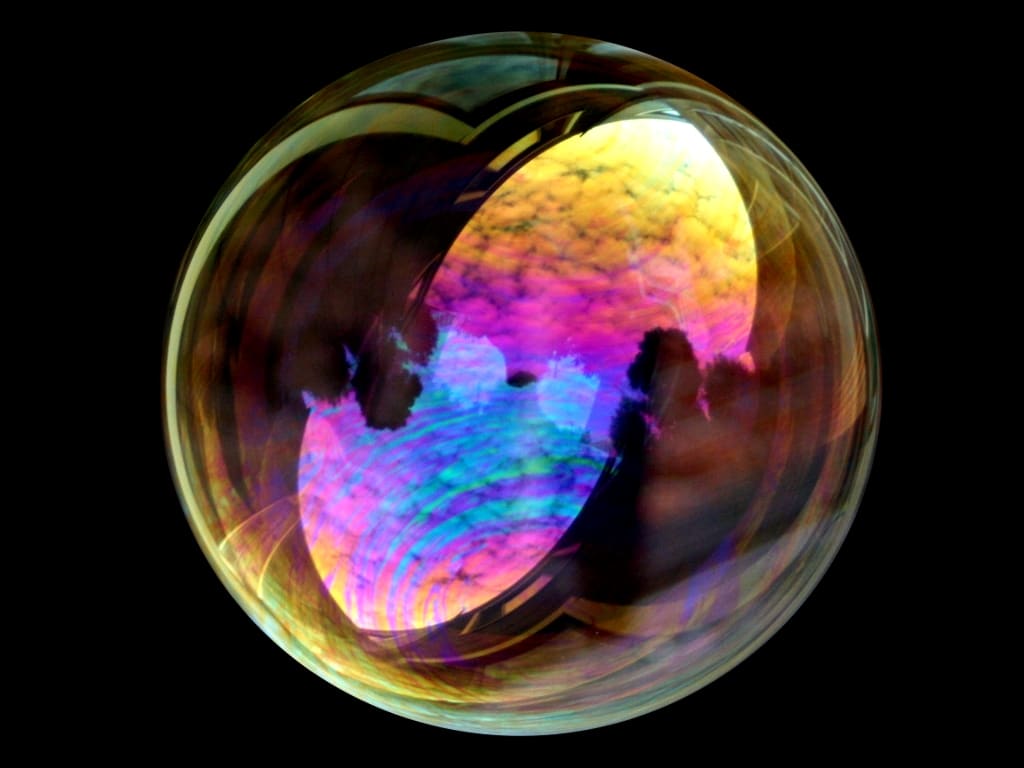 Soap bubbles are made of a very thin film of... well soap.

Much like the soap bubble above, light can both pass through and reflect off the surface of the clear crystalline layer formed by our Dragon’s Breath process. This happens at the molecular level meaning the difference between both the reflective surface of the crystalline layer and the base titanium are mere nanometers apart. This happens to coincide with the wave length of light.

Using this interference in the reflected light we can control the perceived color of the die simply by control how thick we allow the outer layer of titanium crystal to grow. This is done by carefully controlling the amount of heat the die is exposed to and how long the die is left at elevated temperatures. Depending on the final thickness in a given area of the die we can achieve different levels of both constructive interference and destructive interference. 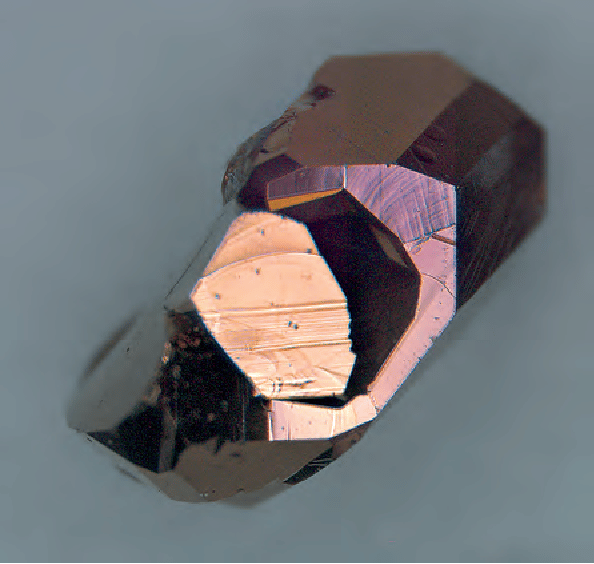 In this case our crystalline layer is not exactly clear...

While it is true that we get a large color change from Thin Film Interference, in the case of tungsten, we also get an added effect from the vivid saturation of those indescribably bright tungsten oxides that range in colors from bright yellow to deep blue and chocolate purples like you see above. Using the combination of the two effects nets us the epic greens and purples seen in these dice.

If you’d like to read more about the insane colors of tungsten oxides check out this fantastic research paper. 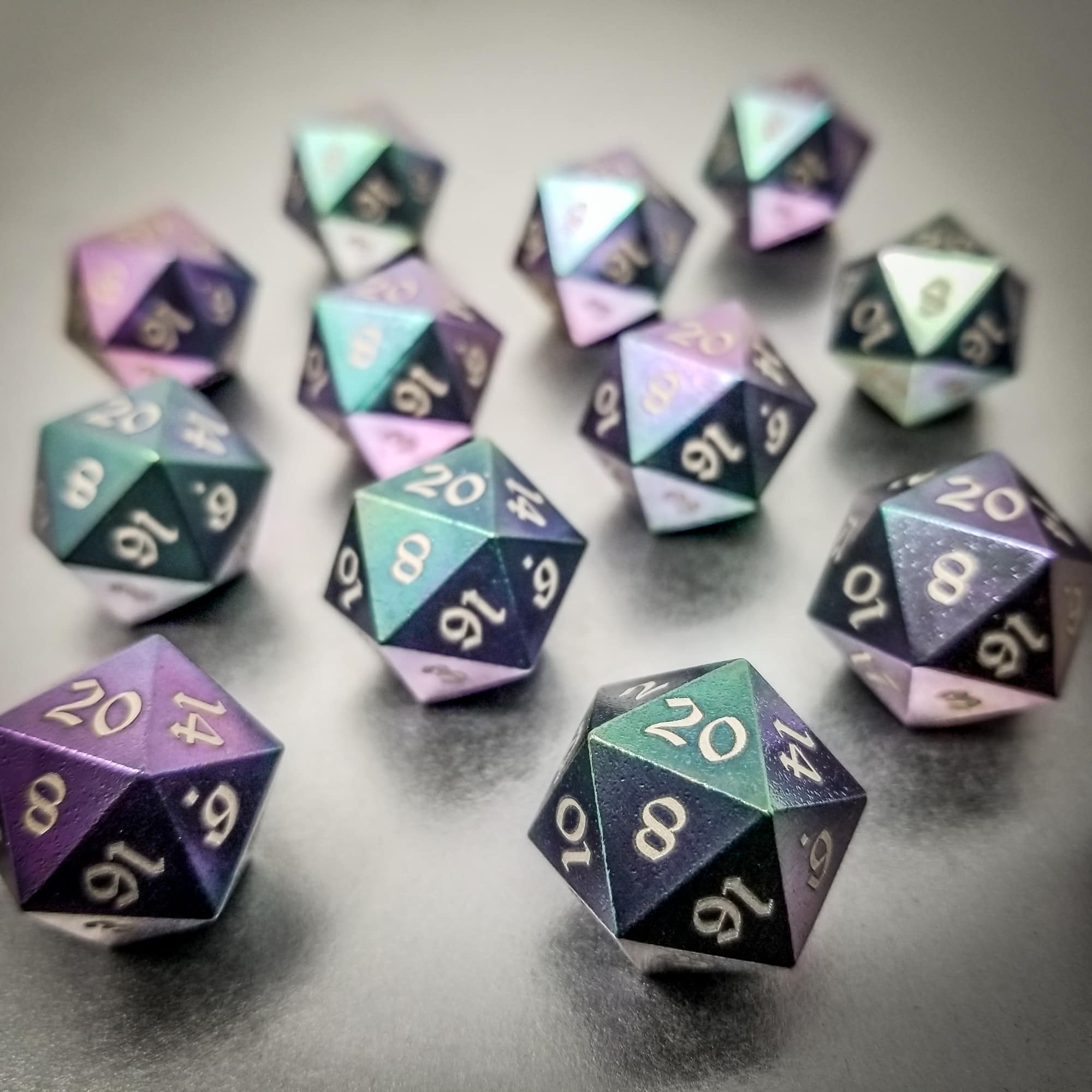 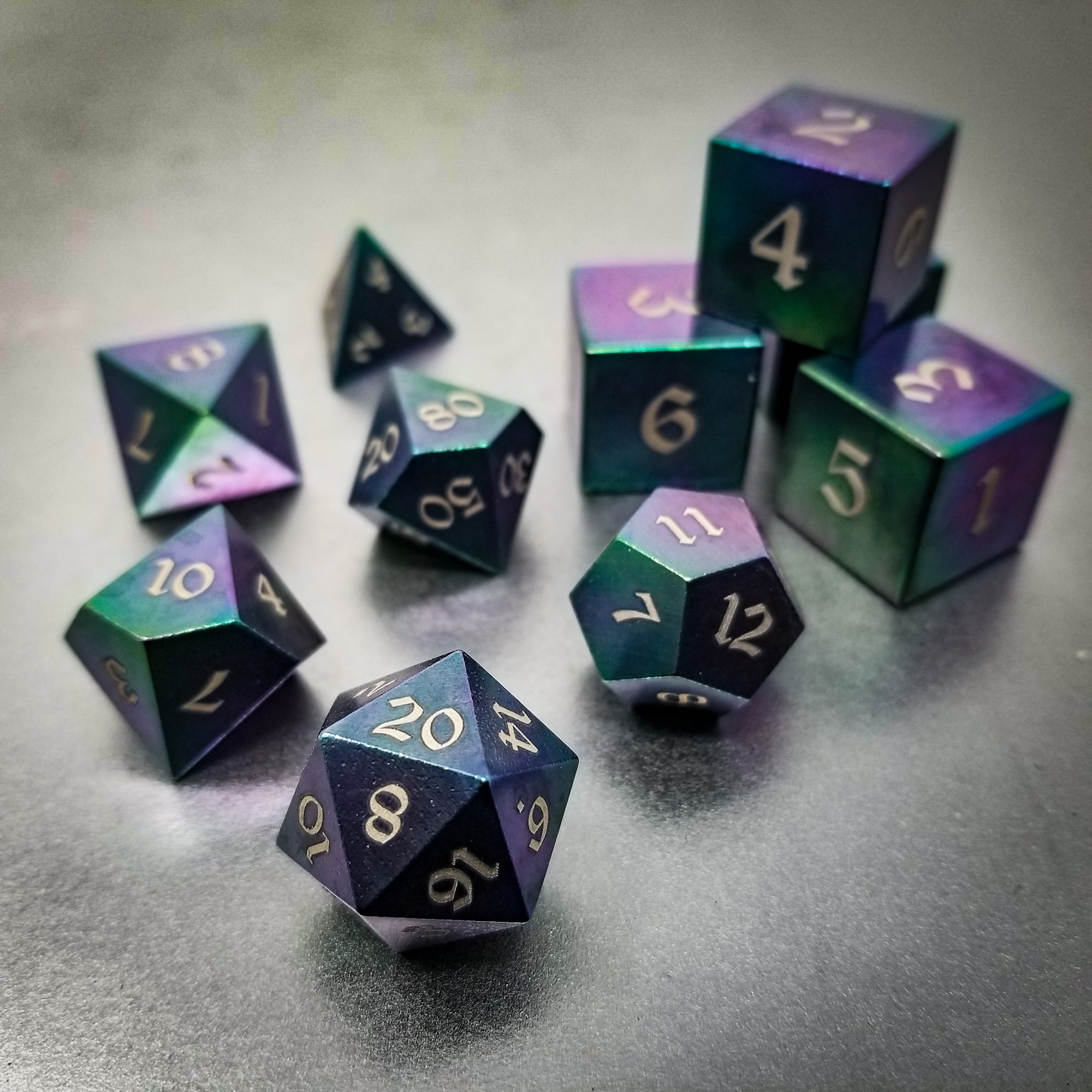 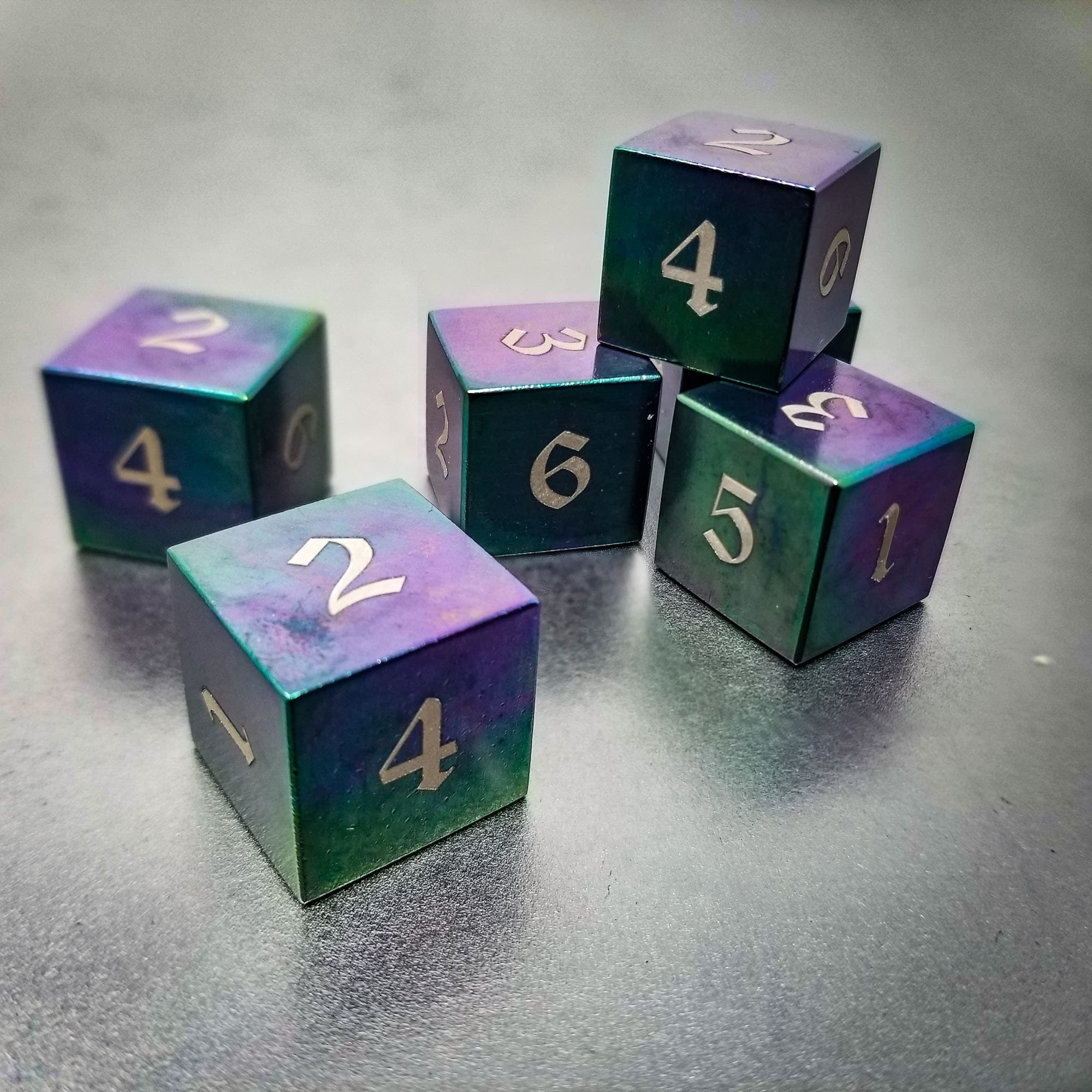 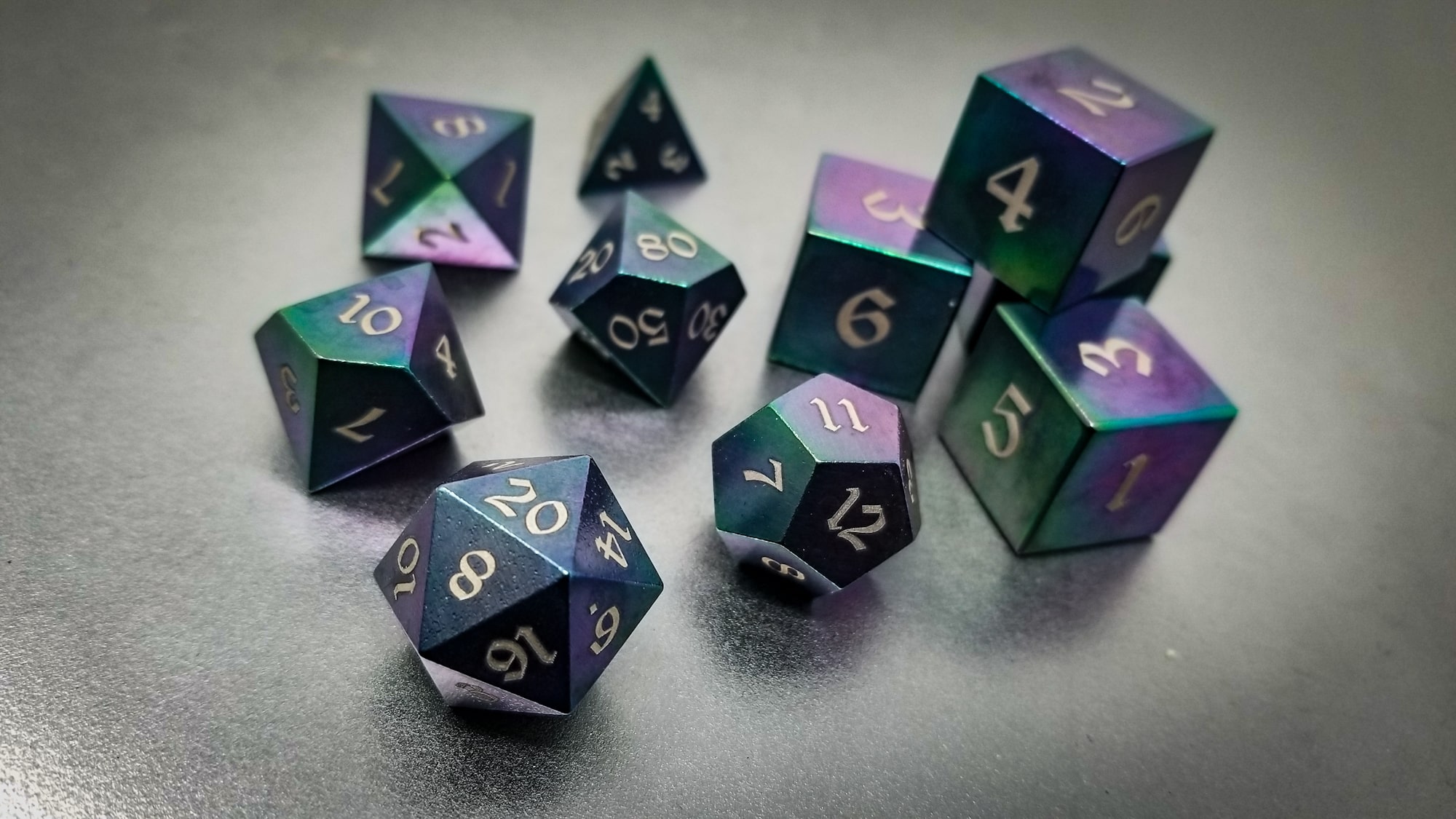 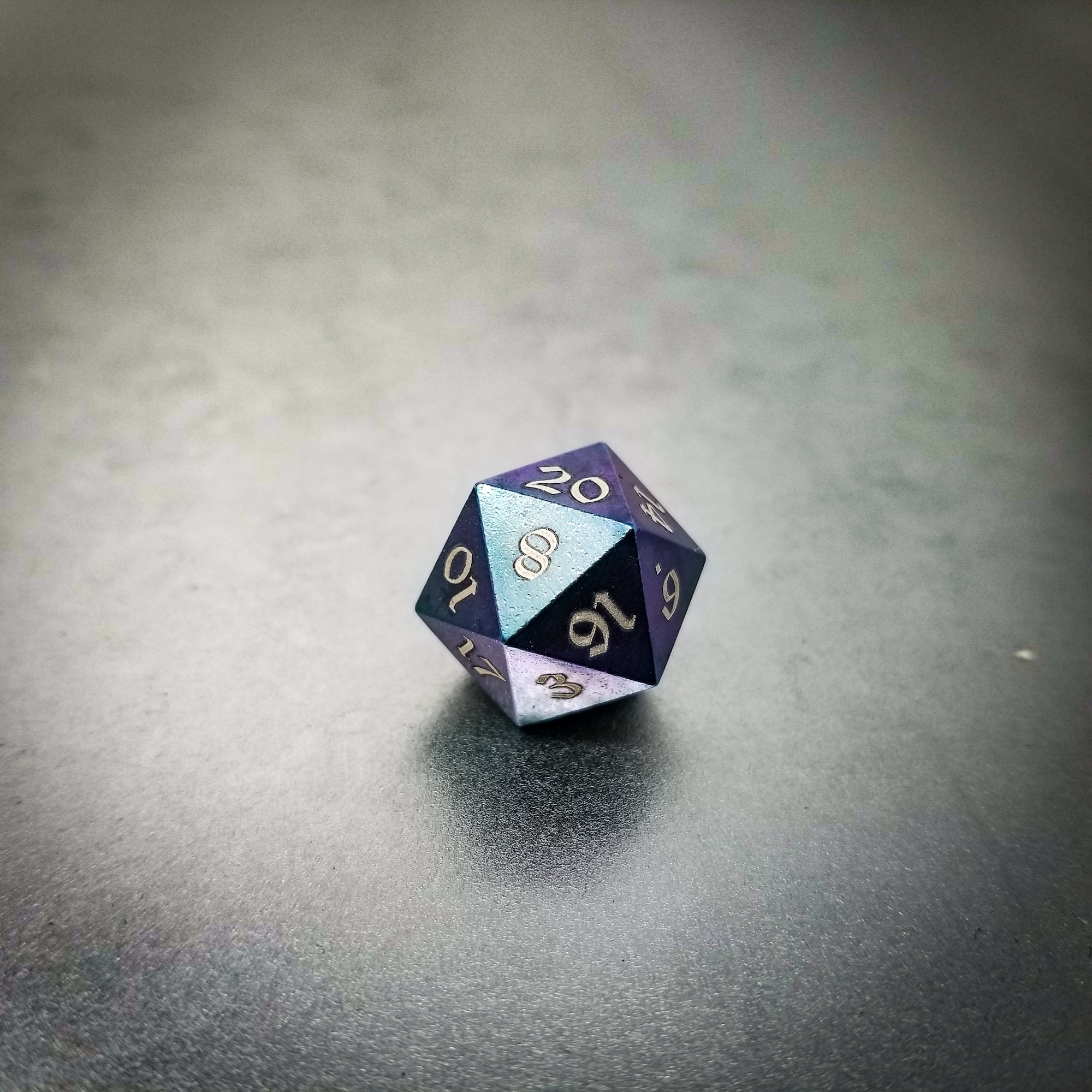