Copper 145, or Tellurium Copper is often used for transformer and circuit-breaker terminals, welding torch tips, and fasteners. Adding a miniscule amount of Tellurium to the copper alloy gives it fantastic machining properties as well as making the copper less malleable and thus less likely to be dented during use. 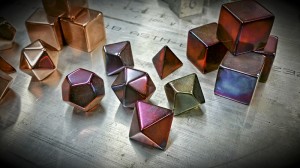 Copper was one of the first metals man learned to work. During the Chalcolithic period copper came in to predominate tool use far out pacing stone tools before the onset of the Bronze Age. Copper has long since fallen out of favor for tool making thanks to its poor edge holding capabilities and soft, rather malleable nature. Today copper is used primarily in electrical power lines and electronics as it is one of the best conductors of heat and electricity around.

A Copper d20 weighs in at approximately 550 grains.