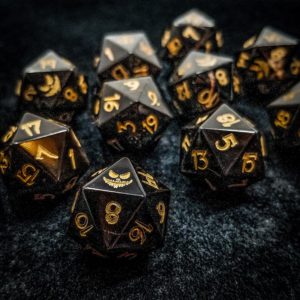 Halloween is here at last and the Minions are celebrating with more of their dark Necromantic rituals!  Today we bring you these Spooktacular American Bison Horn dice with an extra scary twist. This horrifically limited run of twenty sided dice is engraved with an exclusive horror font and an eerily smiling cheshire jack o’ lantern in place of the 20, for added evil when you crit your players to death in that upcoming undead TPK.

These Bison Horn Dice are otherworldly black and contrasted with our Unholy Orange infill. This Aurora pigment is UV reactive, glowing orange under black light which also shows green purple swirl of the necromancy contained within the dark horn vessel. The Unholy Orange glows in the dark a haunting green as well. Each of these twenty sided dice ships in a stamped steel tin to contain the dark spirits within. 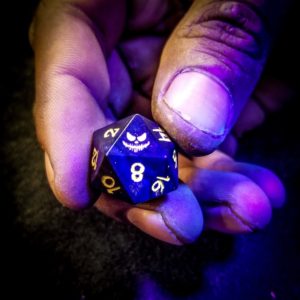 So where did the minions find these black from beyond the grave necronomic vessels to carve their omens to the dark gods of randomization? They were summoned from the undead corpse of a bison, a creature we call a buffalo in America. Though it is of no real relation to buffalo in the rest of the world. It’s actually a large cow like beast with a comically large furry head. They used to roam the vast American interior in equally vast herds until we hunted them to near extinction. Before then the American Indians used the Bison for everything from food, to tools, to lodging, and clothes. Today, the Bison is raised as food right alongside cattle on many ranches. (Buffalo burgers and steaks are quite tasty and low in fat.) It has been successfully reintroduced to many parts of the United States, so it is no longer in danger of extinction. You can read more about the Bison here.

Taking a deep breath while we are making these might just be a detriment to one’s health. Bison horn leave an utter horrid smell that permeates our shop for days after we finish making them. I swear if horn didn’t make some of the best dice on the planet we’d quit working with it all together. Gross. That smell gets in your hands and it won’t wash out… Lucky for yall, these dice don’t smell once they are complete as they only smell while they are being worked.

Be the first to review “Jack O’20s” Cancel reply