Mokume-gane (木目金); a Japanese method of metal working that translates closely to “wood grain metal” or “wood eye metal” so named for the distinctive wood grain pattern it creates.

Developed in Japan during the 1600s, Mokume-Gane was used for decorative work on swords. As the sword ceased to serve as a weapon in Japan, it became largely a status symbol, so demand arose for elaborate decorative handles and sheaths.

Mokume-Gane isn’t just for weebs though, in 1877 Tiffany’s (yes that Tiffany’s), started experimenting with Mokume-Gane jewelry in Paris.  But by the 1950’s Mokume-Gane had pretty much completely fallen out of fashion in both the Western as well as the Eastern hemispheres.

Today, it’s seeing a revival thanks to the current renaissance enjoyed by small artisan workshops, including folks like Patrick Adair Designs and Dakota Wilson Knives. Today, you’ll find Mokume-Gane accents in everything from rings, to knifes, along with countless EDC gear.

Mokume-Gane starts out as a hand forged billet made of a combination Copper, Brass, Bronze, Nickel or Silver. 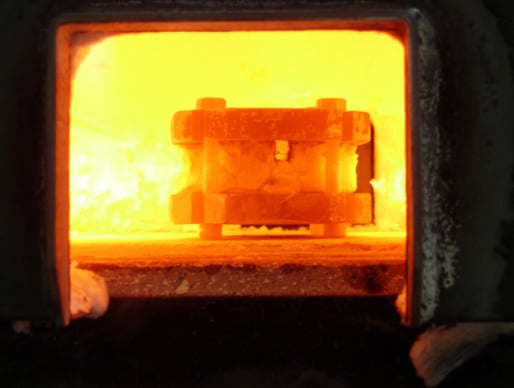 That billet is forged in a white hot furnace and then drawn out to the perfectly round bar stock from which we wrought our math rock magics.

Science and Lasers Oh My!

After receiving an insane level of polish our Dragon’s Dice receive their numbers at the very end of the crafting process. This makes for incredibly crisp and hyper-contrasted numbers. They are engraved with a laser ablation process. Which is a fancy way of saying we blast the surface with 1.21 gigawatts of laser beam awesome sauce that vaporizes the Mokume-Gane in to its constituent components leaving behind an ultra polished number recessed a few thousandths of an inch deep. This process leaves the perfect balance of the underlying platonic solid completely intact, unlike machining away a deeply recessed number.

Like all of our metal dice these Mokume-Gane dice are machined to some of the tightest tolerances in the industry.  We specialize in machining difficult and exotic materials. The nickel and copper that make up these dice prove a challenging combination to work both in milling and our grinding and polishing processes but the combination of the The end result of the warm luster of nickel and rosy  polished copper make for an outstanding die.

Our Big Ass Dice are back in stock and for a limited time you can get 50% off on the biggest of chonki bois around when you buy one at regular price! Just enter code 'ILikeBigDice' at checkout! Dismiss