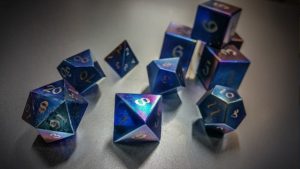 Titanium is rather abundant in the Earth’s crust, though it is rather hard to purify from its naturally occurring state of titanium dioxide, which happens to be a very common white pigment used in paints and dyes. To purify titanium into its metallic state it takes massive amounts of electricity. Titanium is nearly as lightweight as aluminum but is more than 200% stronger. Its also insanely hard to cut and very stable at high temps. So much so that an alloy of Titanium called 6Al4V was used in the construction of the vaunted SR-71 Blackbird (the world’s fastest airplane) to withstand the extreme temps created by the friction of the airflow and high super sonic speeds. 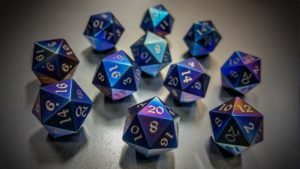 The Grade 2 (Commercially Pure) Titanium we use to make our dice forms wicked colors when heat anodized using our Dragon’s breath finishing process.

Titanium d20’s weight in at approximately 281 grains. While this is lighter than other metals, this is still noticeably heavier in your hand than standard injection molded dice but not heavy enough that you’d likely damage a table top with them under normal use. Titanium is the perfect weight for a die. It’s heavy enough to know your rolling metal, but not so heavy as to be a potential table destroyer.

PLEASE NOTE: these dice are made to order, and require a minimum amount of time to craft as outlined in our FAQ.