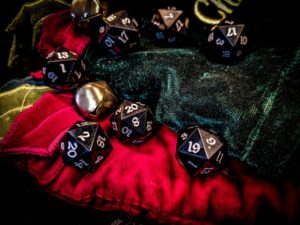 Got someone on your naughty list? Get them just what they deserve, a d20 made from coal. We have a limited number of Naughty List approved d20s and Polyhedral Sets shipping in time for Old St. Nick to deliver to your unsuspecting gamer’s stocking this holiday season. Coal, more specifically lignite coal, also known as Jet, derives its name from the French word, jaiet, and gives its name to the term, jet-black. Jet has been widely used as a gemstone since the Neolithic period and examples of jet jewelry have been found in Germany dating to 10,000 B.C. The Romans found a love of Jet in the 3rd century, but its use fell out of fashion until the Victorian Era once Queen Victoria herself adorned her mourning dress with jet after her husband’s, Prince Albert, death.

Jet despite its historical use as a gemstone, isn’t really a gemstone. Jet is in the same family as pearls and amber, since it is an organic material. Jet is formed from super compressed decayed wood mixed with a touch of salt water then cooked for eons in the warm oven of Earth’s crust.

Don’t forget the check out our Twelve Days of Dicemas offerings, or the rest of our Holiday Dice at this link!

Be the first to review “Coal D20s” Cancel reply