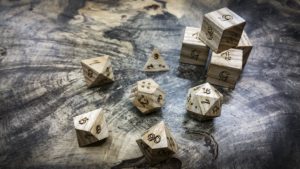 Every set of Artisan Dice is hand-crafted in Texas. As such, we work with the native Texas Ash, which is a drought-tolerant cousin of the more common Mountain Ash.

Texas Ash is a relative of White Ash, F. Americana. It grows on limestone bluffs, and can be found from Dallas in north central Texas to areas west and south. Its water requirements are low, although it can tolerate moderate amounts of moisture as long as the area has good drainage. Its leaves turn glowing red, gold, orange and purple colors in the fall. It is distinguished from White Ash by its leaflets, which are more rounded, and by having five to seven leaflets instead of the seven to nine leaflets of White Ash, according to Texas A&M.

Ash wood is a pale tan color with a tight, consistent grain. This makes the laser engraving really easy to read on a polyhedral set of dice made from Ash.

Interesting fact: Yggdrasil (The World Tree from Norse mythology) is a gigantic Ash tree. Yggdrasil dice would make an awesome set for a Viking Barbarian or Priest.

Please Note: This is the old style engraving. Your dice will be raster engraved. New pictures coming soon.