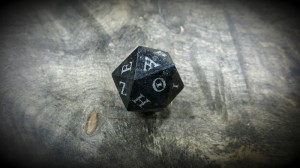 So nearly 3 years ago one of my customers (I do apologies, but I can’t remember her name for the life of me, and the message has been long since buried) put me in touch with the Metropolitan Museum of Art about making a modern interpretation of the worlds oldest twenty sided die. 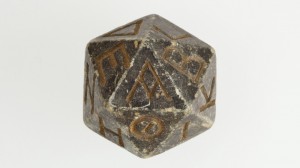 This die was originally collected by Reverend Chauncey Murch, who found the piece while serving as a Missionary in Egypt between 1883 and 1906. It was originally crafted some time during the 2nd or 3rd century B.C. putting it at towards the end of the Ptolemaic Period. Upon Reverend Murch’s death the die was purchase by the Metropolitan Museum of Art in 1910.

Originally the die was crafted from Serpentine which is a semi precious stone that ranges in tone from brown to green and is a source of both magnesium and asbestos.  Serpentine gets its name from the green scaly appearance in serpentine’s natural form. Serpentine is used extensively in gems and ornamental work. When polished it has contains cloudy patches interspersed among clear regions. 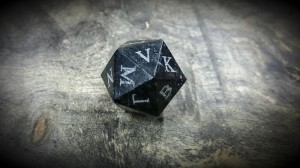 Remember how it’s a source for asbestos? Yeah no chance I’m working with that stuff in my shop. So instead this weekend I noticed Fluffy had cut up a ton of architectural grade soap stone blanks for something else he was working on, and for some reason it sparked a memory of this old project. So, Fluffy’s blanks went missing and I fired up the CNC’s then I set about figuring out what those funny symbols were, which was something that had been giving me fits off and on for the past 2 years and was one of the reasons this project languished on the back burner for so long. 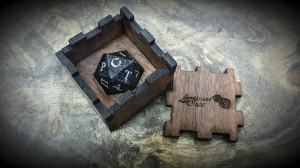 So for a very long time I was stuck there. The only remaining letter in the first 20 letters of the Greek or Coptic alphabets that remained unaccounted for was the letter Alpha, and it just didn’t fit. And then I stumbled across, this photo on this page. Then after a few more beers and even more poking though the recess of the internet, I finally figured out that the mystery symbol turned out to be a stylized geometric representation of the Coptic Alpha.

But why would the MMA say these were the first 20 letter in the Greek Alphabet, when there were 2 symbols that were most definitely Coptic in origin? Well after a bit more research I discovered the answer to that question lies in the time period in which this die was crafted. Coptic was the latest form of the Ancient Egyptian language, however during the 2nd and 3rd century B.C. the Egyptians began transitioning to the Greek system thanks to a small encounter with Alexander the Great. Though the details of that encounter are a bit out of the scope of this post, it’s still pretty neat to see some of the greatest events in Antiquity become apparent in the symbols on the world’s oldest d20.

Armed with a more complete view on how the world’s oldest d20 came together. I set out to complete a modern emulation of this small bit of gamer history. While the original die was most likely not used for gaming, but instead created as an exercise in contemporary geometry. After all the platonic solids were first studied by the Ancient Greeks around 360 B.C. Most notably by Plato, for whom they are named, and Theaetetus who was the first to describe them mathematically.

The Artisan Dice version of this particular dice needed to be a gaming piece. To that end, you’ll notice that the letters on our version all face the same direction as they would on our normal N+1 style d20s. I’ve also set the font in a more modern serif style of the Greek/Coptic Alphabet. Where as the original was set in an overtly geometric type.

That left only one small problem. What do we call this thing? “The modern emulation of the world’s oldest twenty sided die”, is a bit of a mouth full to say the least. So after going back and forth with the minions, some of whom were still upset about some missing soap stone blanks, it was decided that the die should be called a Ptolemaic d20, to pay tribute to the era in which the design was originally crafted.

So how do you get your hands on a Ptolemaic d20? Well simply choose whether you would like us to crafted your Pd20 in Black Soapstone or a random selection from the myriad of exotic woods we stock.

The color of the soapstone dice range in color from gray to black.