Note: due to the high demand, we have temporarily removed the ability to order Amber d20s while we secure more material to make them. 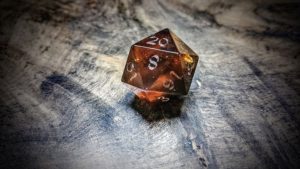 Amber is one of the world’s oldest gemstones. Though it is not truly a stone. Amber was one of the original materials of long distance trade thanks to its scarcity, uniqueness, and light weight. Amber has been refered to as Baltic gold, owing to its plentifulness in the Scandinavian region. The Vikings developed a rich trade in amber making it one of their principle export goods, trading amber as far away as Byzantium. 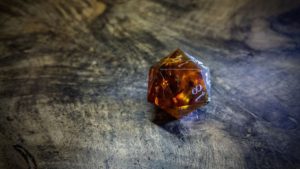 In 600B.C. the Greeks discovered that amber could generate a static charge if rubbed against wool. This charge can attract small things like straw or hair. The phenomena gave rise to the Greek name for amber, elektron, from which the tiny particle we call the electron gets its name. The Arabic word for amber literally translates as “straw thief”. On the other hand, the English word for amber is taken from the Arabic word anbar which, amazingly enough, does not mean “straw thief”. Anbar is the root word for ambergris which is a foul smelling bile duct secretion from the intestines of the sperm whale which can be found floating along the coast. 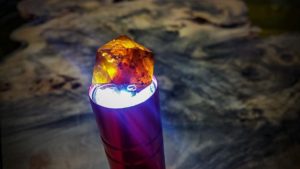 Amber glows when held to a light.

So what does a nasty poo smelling whale excretion used in the perfume industry have to do amber? Turns out they can be similar in color and both are found along the coast in the Baltic region which as I’m sure you’ve already guessed, led to quite some confusion at one point or another.

So what exactly is amber? Simply put, it’s really old tree resin. Eons ago, a now extinct species of pine tree oozed sticky rosin all over the place. That rosin has aged and dried out for so long that the polymers in the resin have had time to solidify into a soft stone like material.  This stone like Amber typically has inclusions or foreign material trapped inside. The most famous of which are the insects that can be found in some specimens. These insects can be quite valuable for research purposes and the occasional cloning of the odd dinosaur.  In modern times Amber is found in Mexico, Indonesia, and the Caribbean as well as the Baltic region.

PLEASE NOTE: we are not currently taking more orders for the Amber dice while we get more raw materials in. 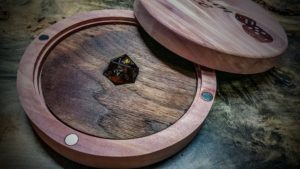 Each Amber d20 comes in its own display case.