Ancient Bog Oak is an exquisite material steeped in history and lore. These Bog Oak Dice were raised from an Irish peat bog and crafted with inlaid Celtic knotwork.

Ancient Bog Oak is a stunning material steeped in history, literally steeped like a fine swamp flavored tea. As such, it seems only proper to push the boundaries of what can be created with such an amazing material. So how do we do that? We scale up to our Big Ass dice, engrave them with a gorgeous Celtic Knot pattern and inlay the whole set with Bronze. The material dates back to the Bronze age, which if you hadn't guessed, is characterized by the extensive use of Bronze. Seeing this ancient oak hail from the Emerald Isle, there is no better way to show that heritage than with a traditional Celtic Knot pattern.

The process of crafting our dice takes an extensive amount of time and skill on any level.  When we create one of our specialty sets like these, however, the amount of hand work required increases significantly.

After their initial machining, each die gets treated with special care, being shaped and inlaid by hand.  It takes a steady hand and keen eye to fill intricate Celtic knot engravings with bronze.

These dice are massive. Coming in at 8 times the volume and weight of our standard sized ¾” d20s and measuring a full 1½” face to face (roughly the perfect size to fit in a minion’s palm), they are guaranteed to make your players cower in fear, or your DM green with envy.

Our Big Ass d20s are crafted from solid billets of exotic woods and at this scale the grain and figure of these exotic woods is showcased in a manner that just isn’t possible at our standard ¾” scale.

We love history and particularly the history of the materials we use to make our dice.  Ancient Bog Oak is one of the oldest woods around and as such it's rich with history in its own right.  This wood dates Bronze Age, when human cultures discovered the ability to smelt copper with tin to create Bronze.  It was an advancement that allowed the use of a metal stronger than any other available at the time.

The patterns have been adopted over much of the world, particularly throughout the former Holy Roman Empire, most commonly seen adorning churches and illuminated manuscripts. Typically a Celtic Knot is characterized by a single line twisted and laid upon itself in plaits, connecting back to their beginning to form a continuous loop. It is widely believed to symbolize the interconnectedness of life and eternity.

Each die is engraved with a custom knot pattern painstakingly hand drawn by our resident Art Minion. Each die even has an intricate Celtic animal drawn for the high number, with its own symbolism and significance. 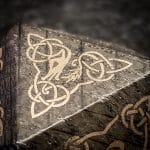 On the d20 you'll find The Dragon, a mighty creature common to English and Welsh lore, is a creature of fire but also heavily associated with the land. Druids even viewed the Earth as the body of a massive dragon. 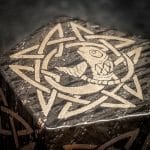 On the d12 you'll find The Salmon, a creature of great wisdom, was said to have acquired its knowledge from eating the Nine Hazels of Wisdom that fell from the Tree of Knowledge. Many sea creatures are viewed as symbols of wisdom but the salmon was also said to be the oldest of living creatures as well. 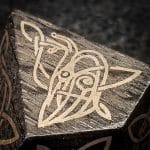 On the d10 you'll find The Crane, typically a symbol of change as a sign of or punishment for deception. Numerous myths speak of a dirty or other figure transformed into a crane, such as the Lady of the Lake, Side, or Munanna 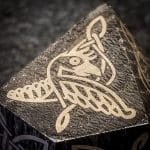 On the d% you'll find The Raven, most often associated with death but also used by the Druids in Augury. It was said to fly over Celtic battlefields as a god incarnate. 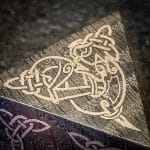 On the d8 you'll find the fox, crafty, cunning, and wise, it is also a symbol of passion and play. Often seen as a sign to follow ones goals. 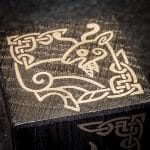 On the d6 you'll find The Goat, often depicted as the Horned God Cernnunos, is sometimes a symbol of nature. 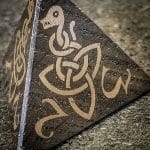 On the d4 you'll find The Snake, represents the cyclical nature of life, particularly due to the annual shedding of its skin. It is often a phallic symbol and symbol of
the Triple Goddess. 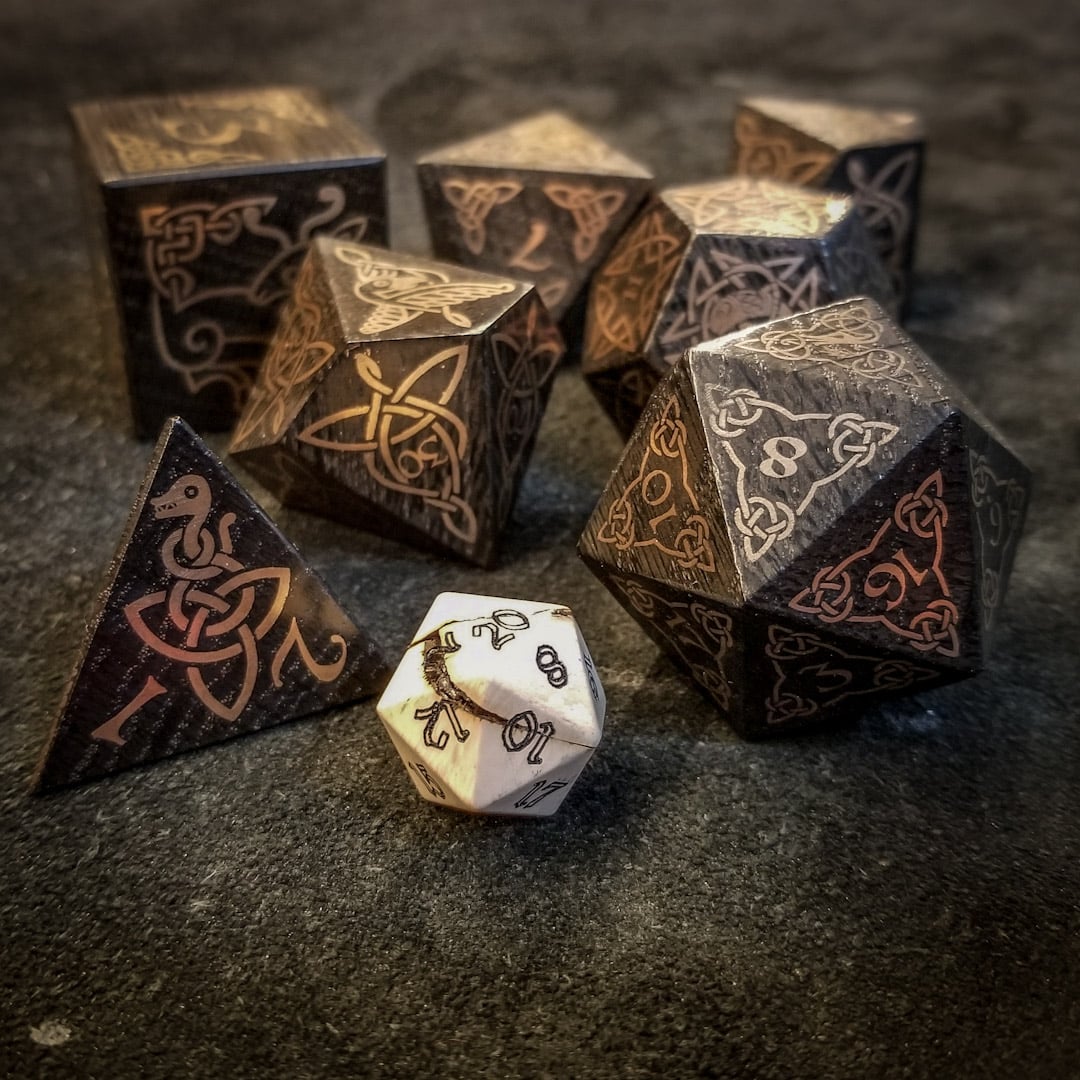 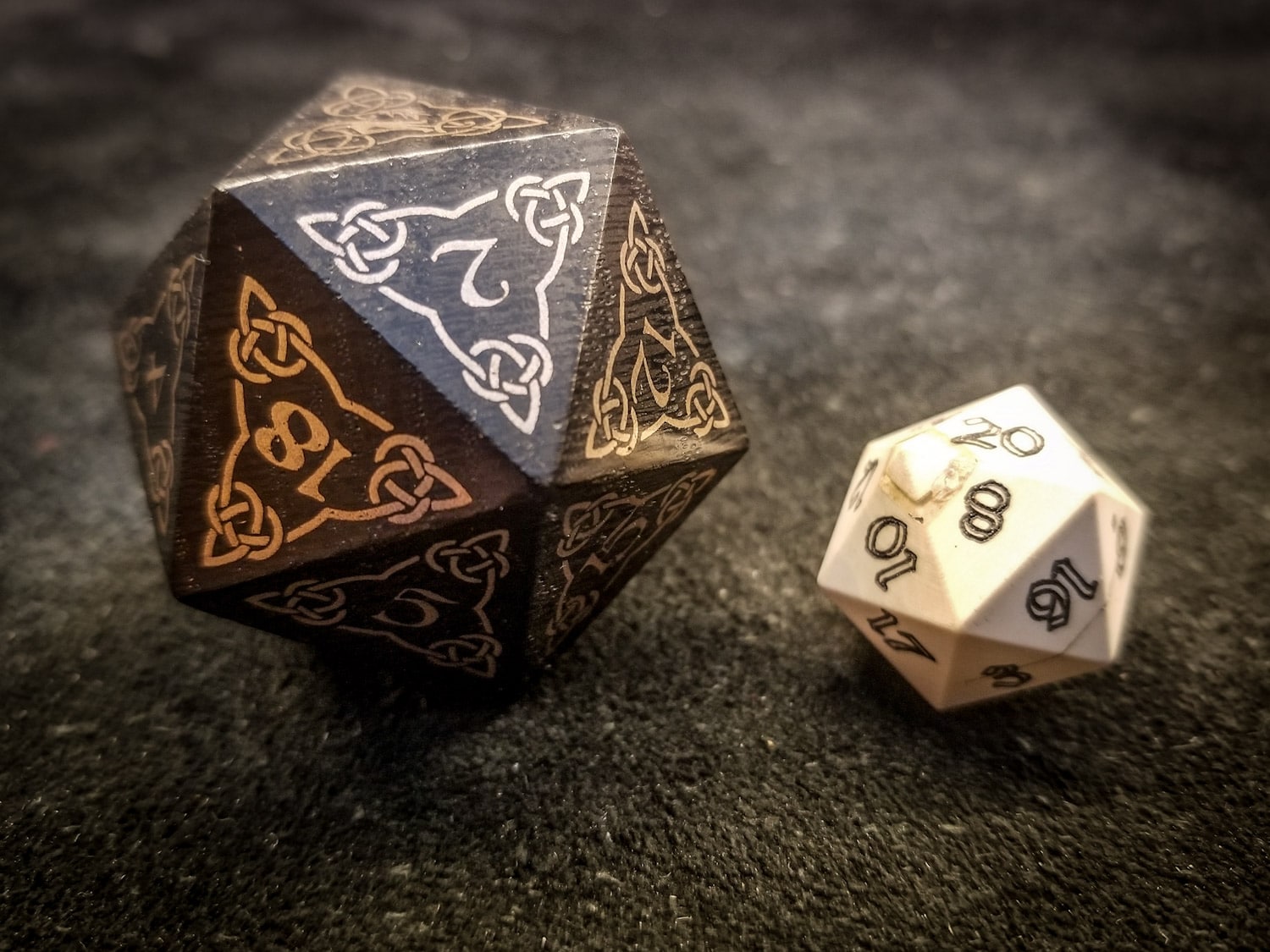 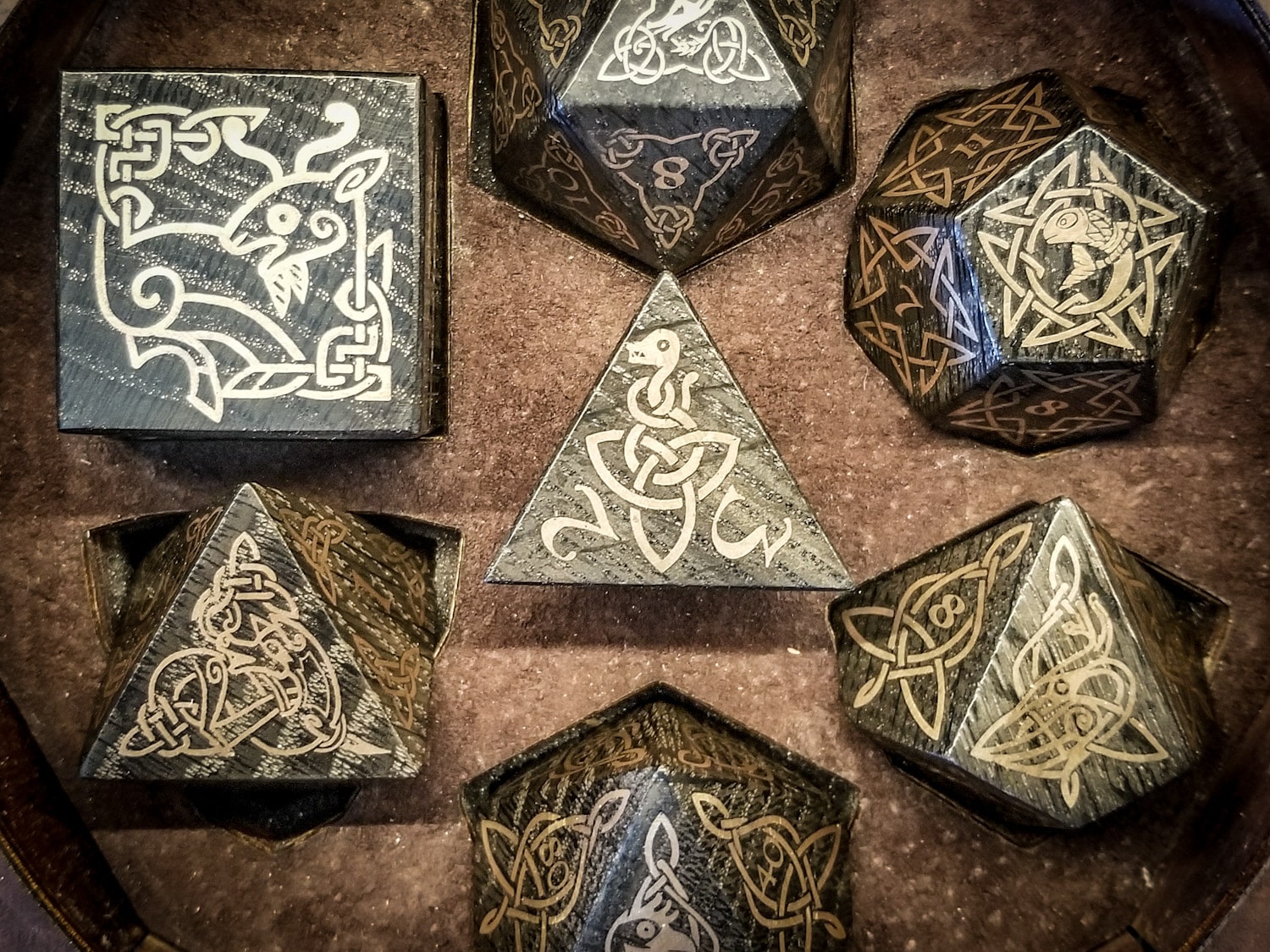 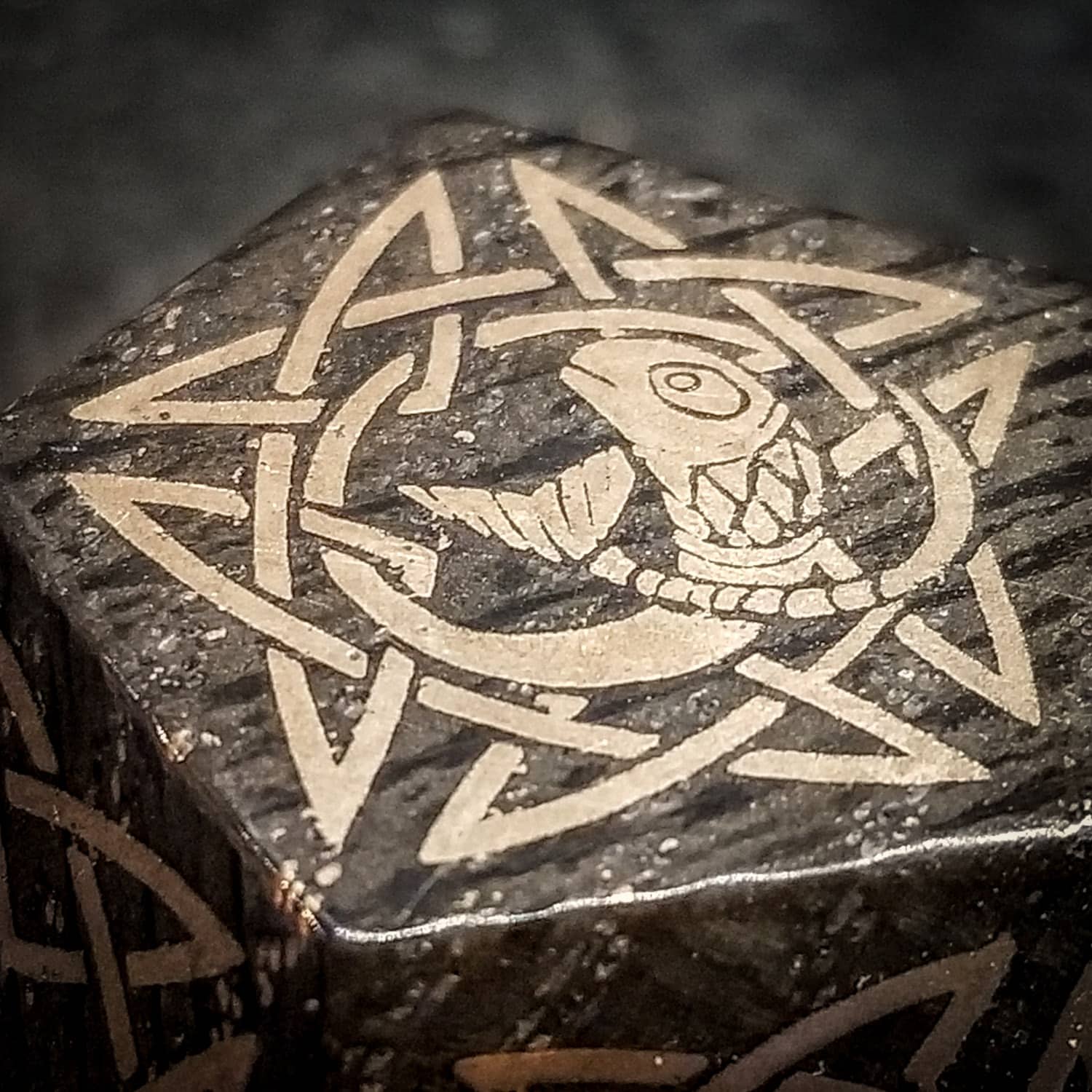 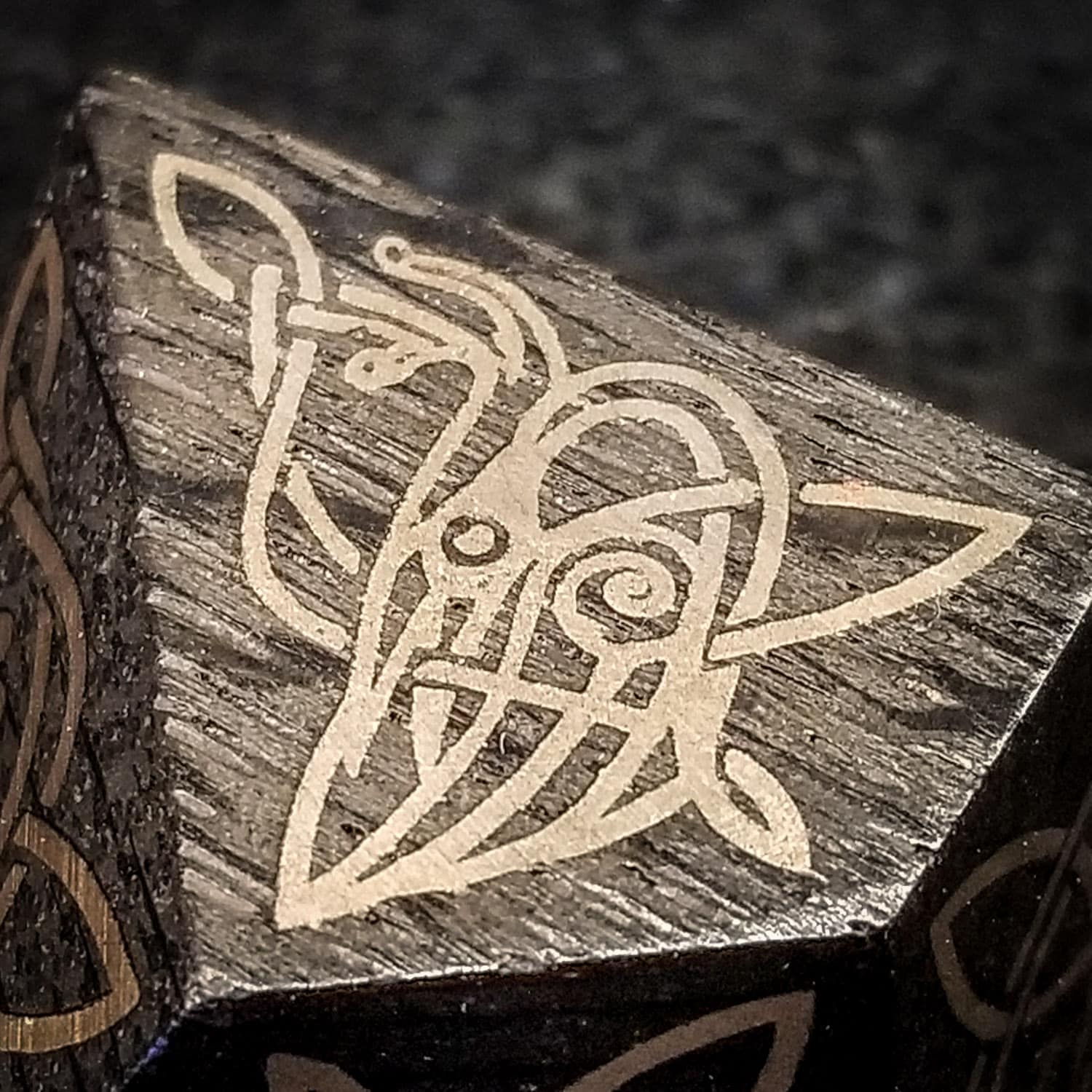 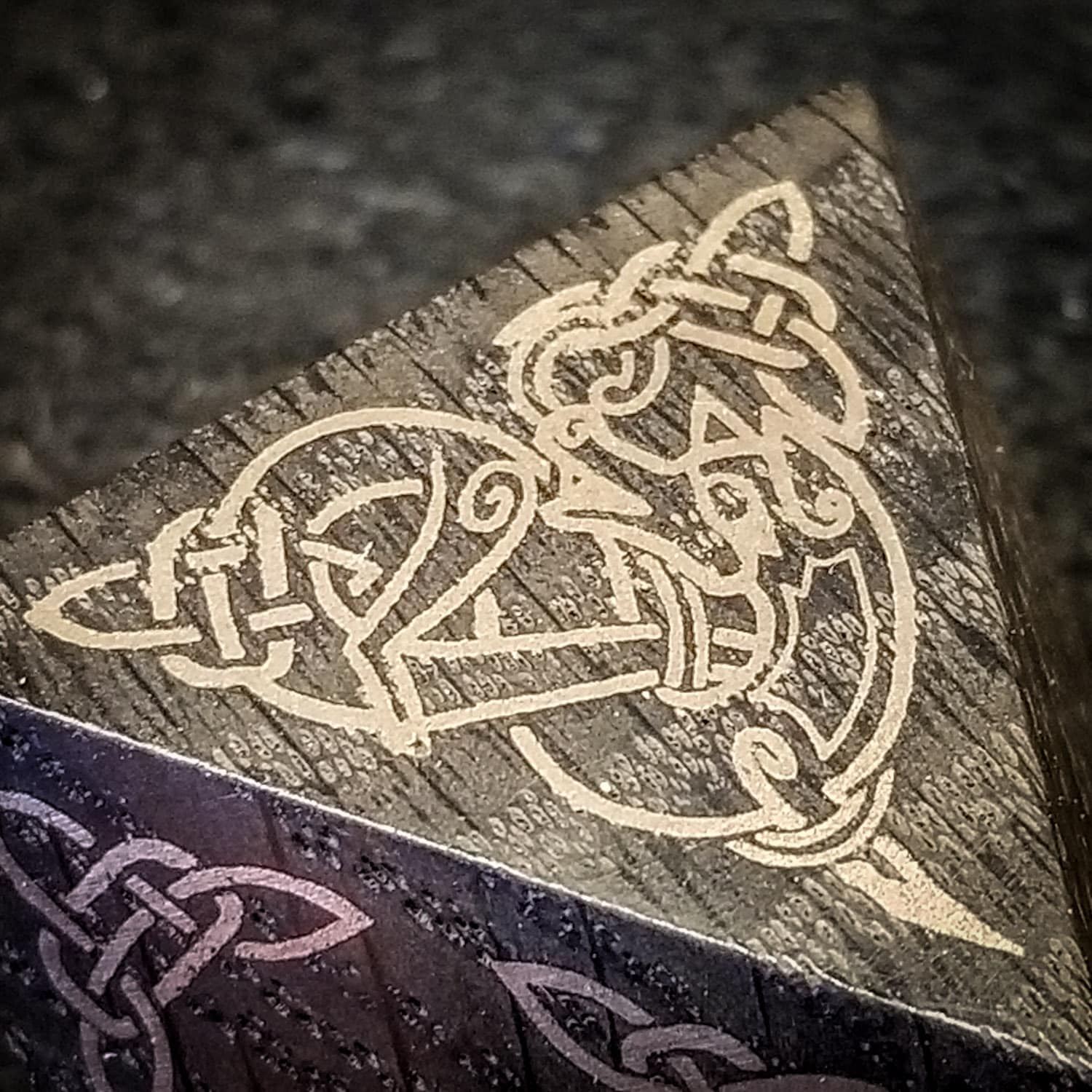 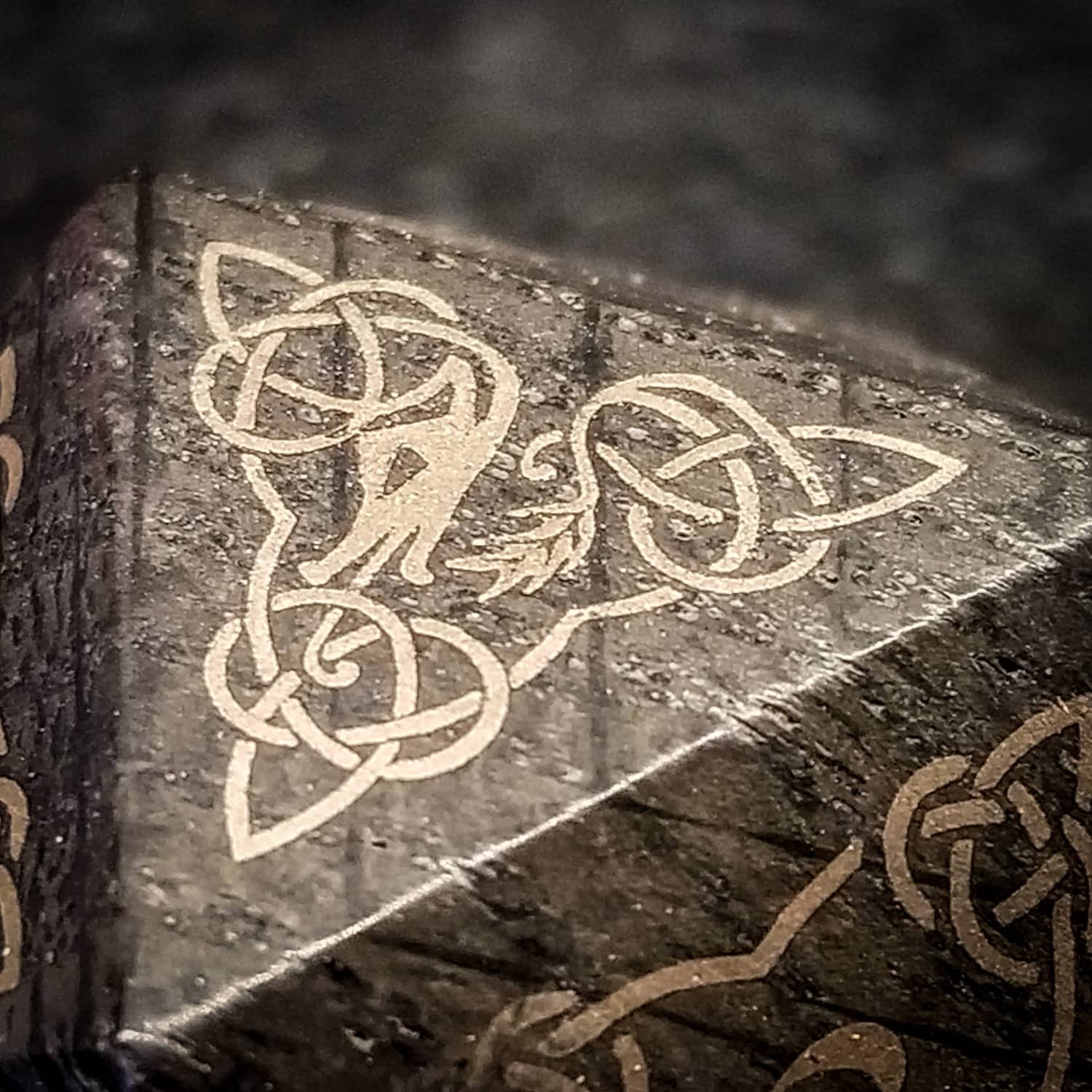 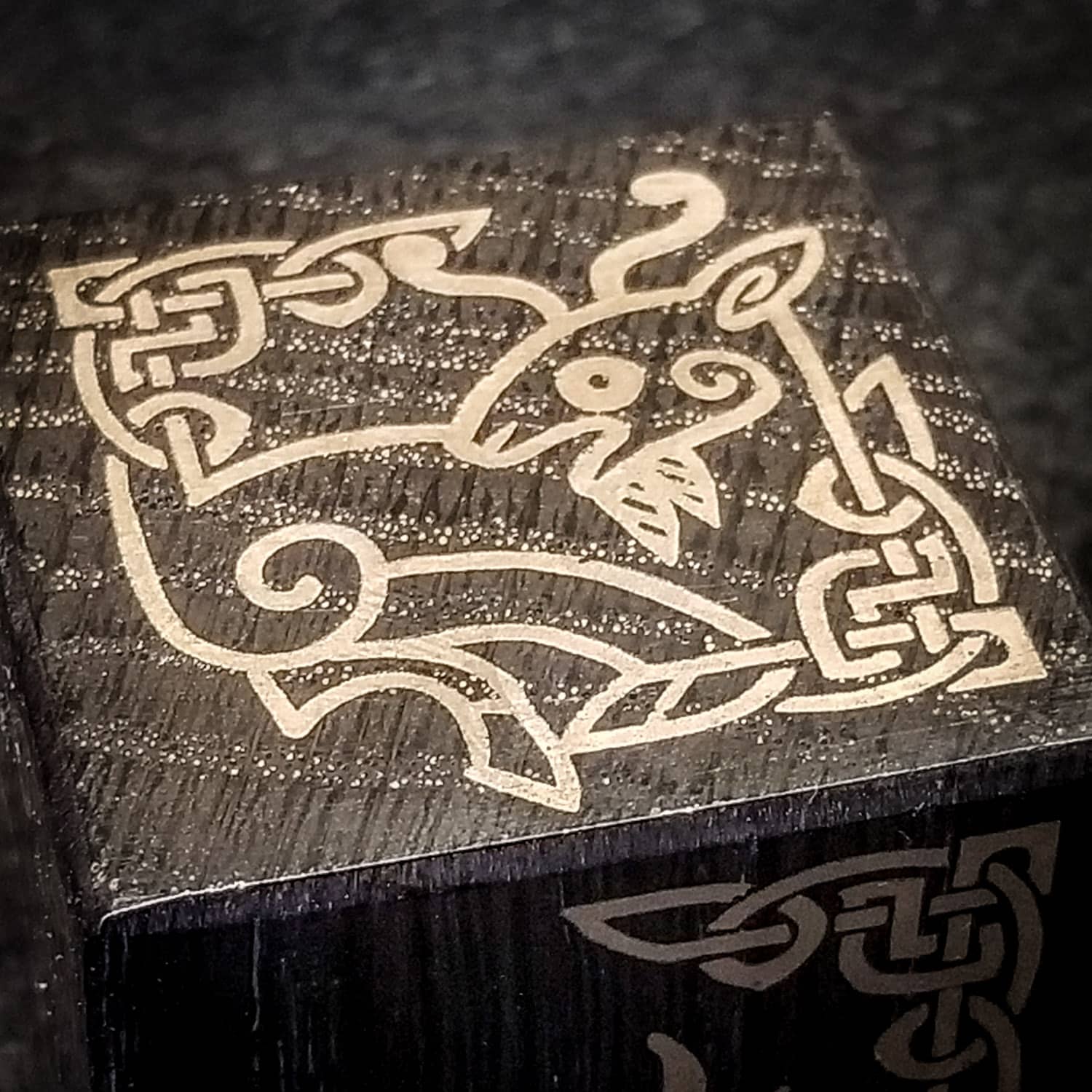 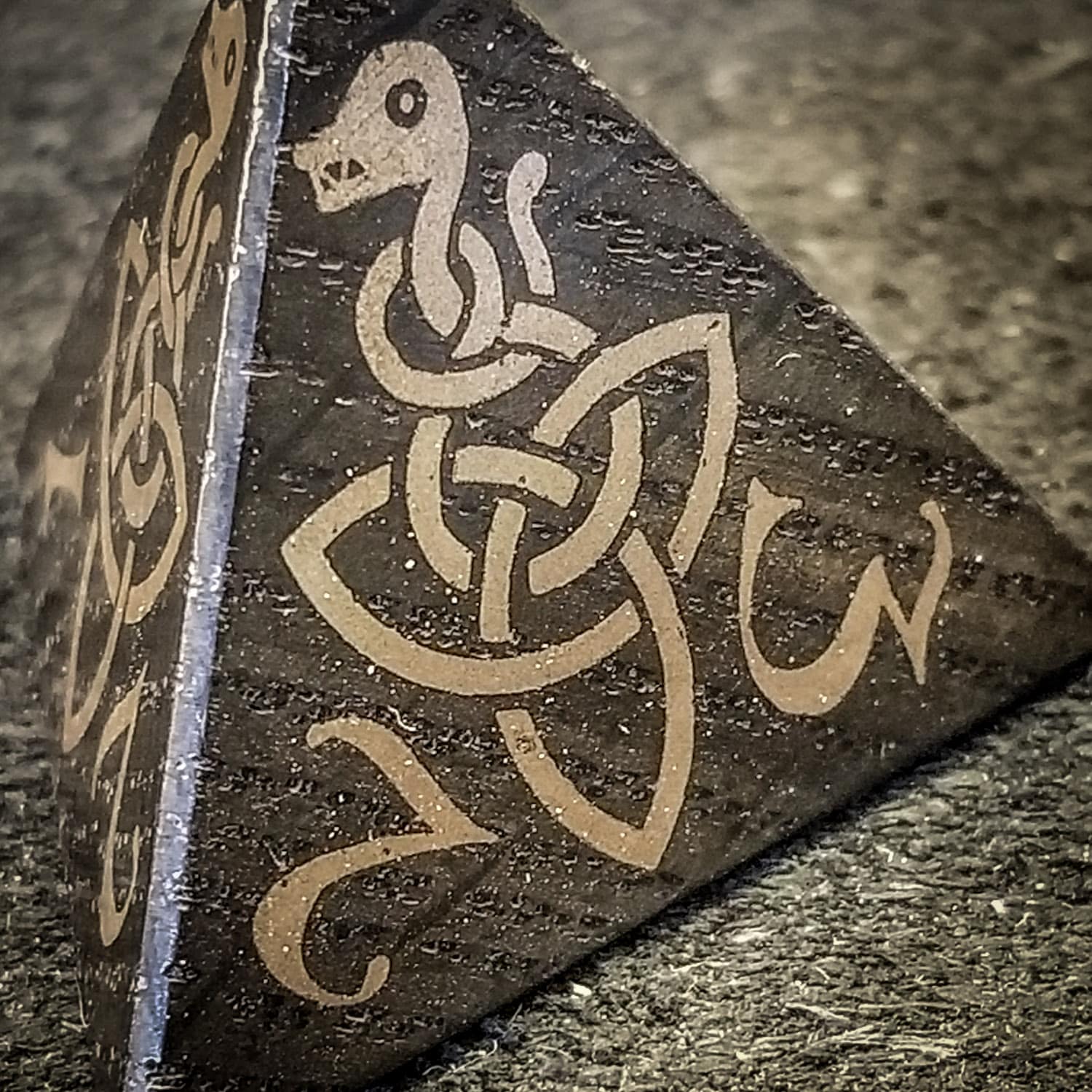 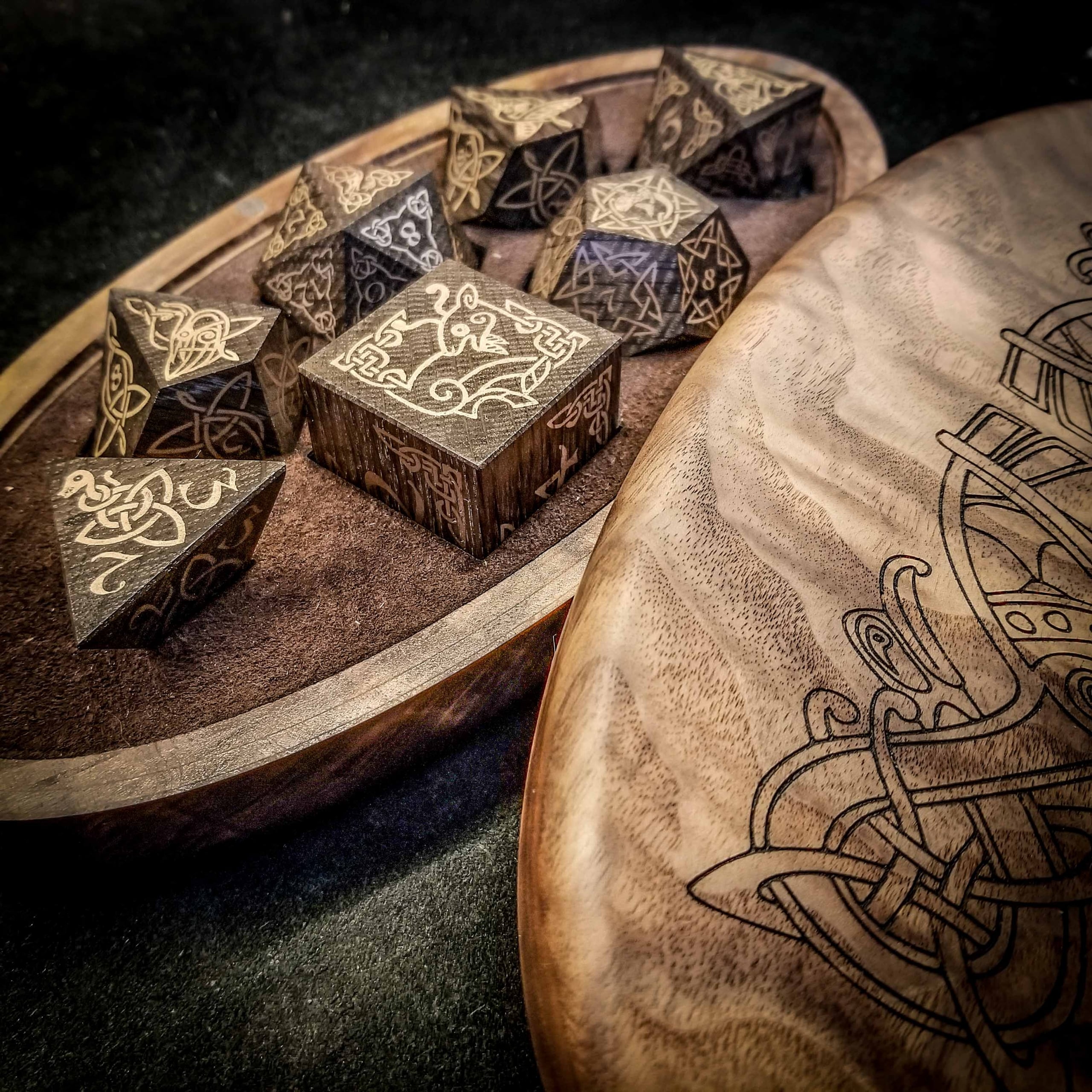 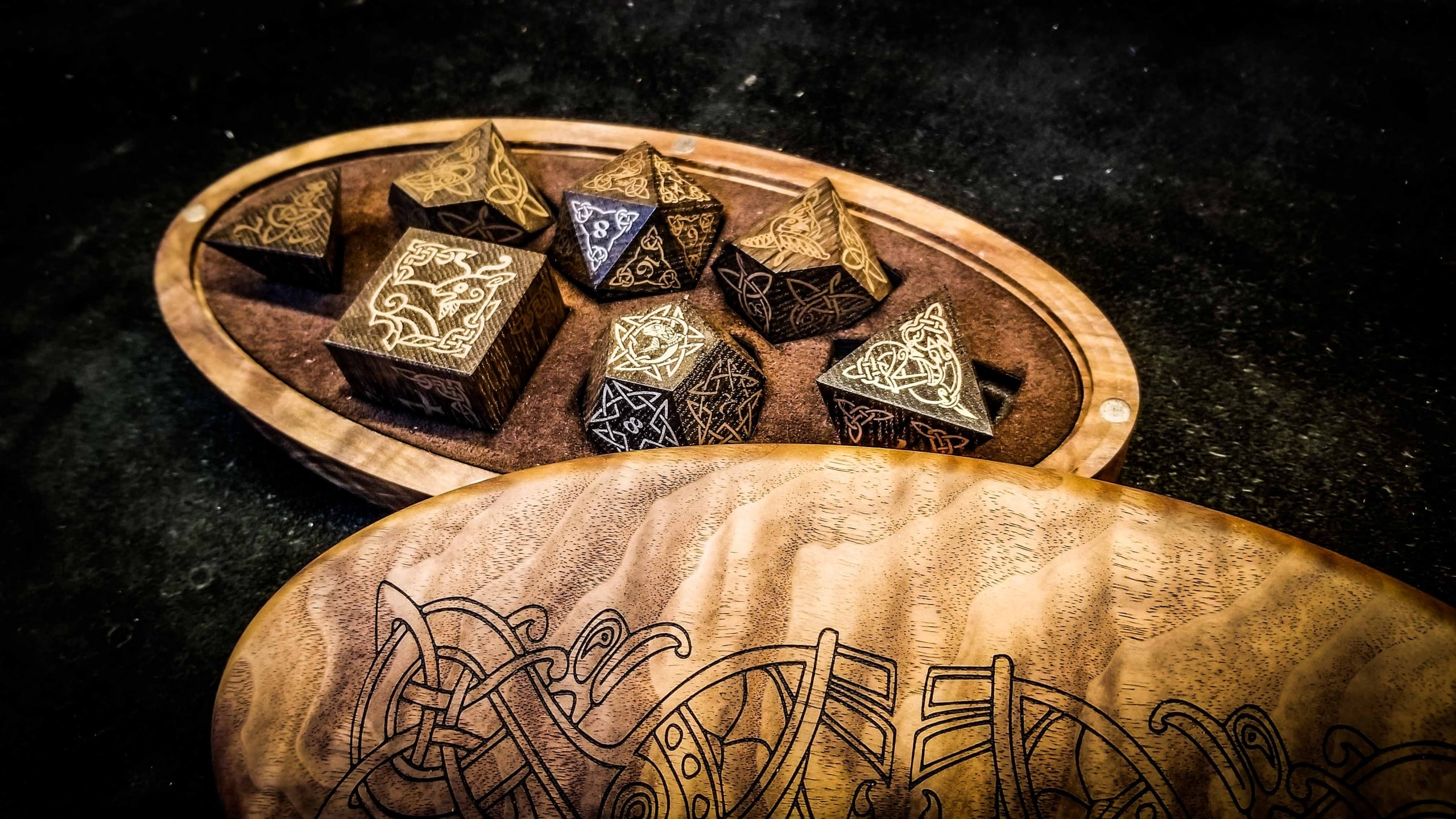 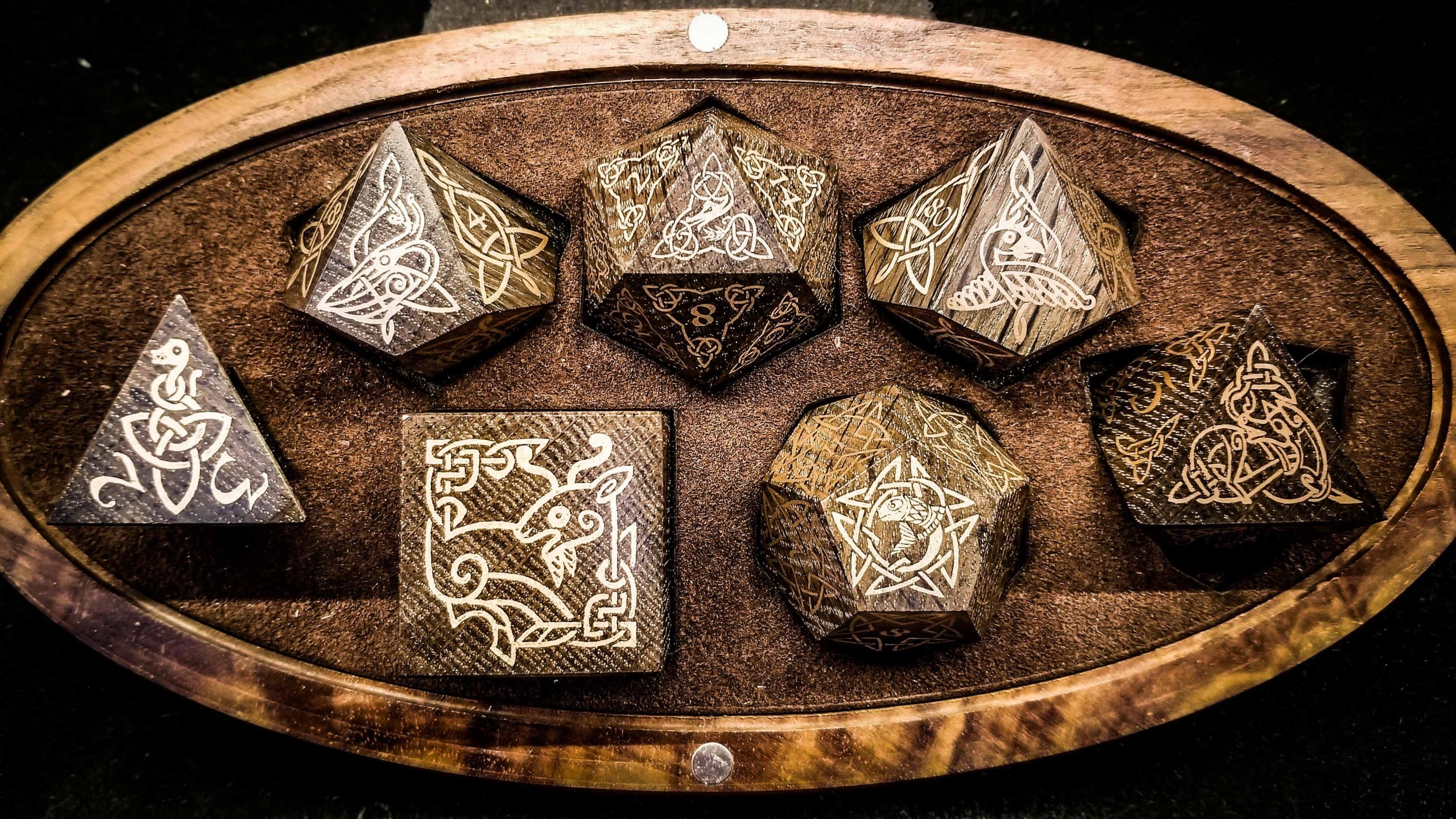