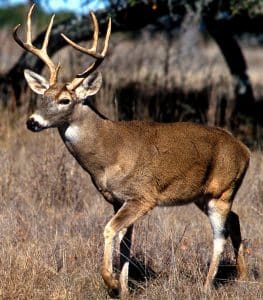 Deer begin to grow antlers in early spring.  By late summer they are fully grown and ready for that annual battleground of breeding called “the rut.” Whitetail deer antlers are some of the fastest growing tissues known to man. The antlers originate from the pedicles (the part of the skull responsible for antler growth) backwards but begin to sweep forward as they grow at the phenomenal rate of up to 1/2 of an inch PER DAY!!!

While we tend to think of deer antlers and horns (like those belonging to buffalo or cows) as being similar, they are far from it. Antlers are shed every spring, whereas horns are attached the entire life of the animal. These sheds are where we obtain the antlers we use to make our dice and no deer are harmed in getting these antlers. Antlers tend to be mostly solid as the blood supply is provided by the velvet, a soft fuzzy blood filled tissue that covers the antlers while they are growing in the spring and early summer months. During this time the antlers are soft and easily broken. Once fully grown, they will harden and the buck will begin to rub or scrape the velvet off on small trees and saplings. 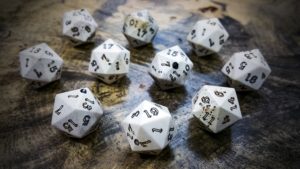 So, why did we choose deer antlers as the source for our antler dice? Antler has been in use as tools since the days of early man. In the United States, it was used by the American Indians as  everyday tools like awls, for making holes in leather along with billets, drifts, punches and flakes, used in flint knapping. You will also find its use in fishhooks and even tools for straightening arrows. So, why did antler find such a variety of uses from the Neolithic right up until the Europeans discovered the new world? It’s strong, harder than bone, readily worked, and the stuff lasts for ages. Seriously, they are still finding this stuff in dig sites around the country. 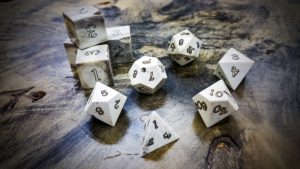 Well, at first we skipped the species entirely owing to our familiarity with them as hunters. Whitetail deer typically don’t sport massive racks of impressive antlers until they are between 4-6 years of age. Younger deer have thinner horns that do not have the girth we need to carve our dice from. So we overlooked deer all together and moved on to species like moose and elk, which have truly massive antlers of epic proportions that are collected every year in droves by the boy scouts. Sadly, the majority of elk horns are spongy, porous, and chock full of holes for the majority of the main beam. Much like avian bones, this appears to be nature’s way of keeping the elk’s antlers light enough to be useful. But alas, this is not so useful for the making of dice. So the search continued full circle back to, what turned out to be our not so familiar friends, the white-tailed deer. 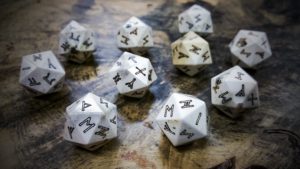 As it would turn out, larger deer antler sheds are available with the girth we need and unlike elk antler sheds, they tend not to be porous and full of holes. In fact, these deer antlers tend to only have one hole that runs the length of the main beam. (We fill this hole with a clear resin.) These antlers are not as common as the thinner ones we typically see, so we will only be making these dice in limited quantities. So when these are gone, don’t know when we will be making any more. In this run, we’ve made one full polyhedral set along with a few dozen d20s and 10 Runic d20s as we’ve had several requests for those in bone or antler. (You can learn more about our runic engraving here)