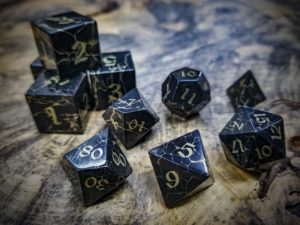 This project has been around for quite some time as we have been looking for a way to offer semi precious stone dice that could stand up to the rigors of play. We don’t make shelf queens. Our dice are made to game and we back that up with a life time warranty. Most semi precious stone dice proved to chip easily and wouldn’t hold up to regular use. That’s no bueno.

So how did we get around stones natural propensity to chip? Simple we cheated. This new line of dice have been crafted from semi precious stone set in a resin matrix. The end result is flawless in execution, beauty, gameability (if that’s not a word, it is now). By binding the ground semi precious stone in a resin matrix, it adds a toughness to the resulting die that unaltered stone just doesn’t have while retaining all the visual properties and heft of the original stone. 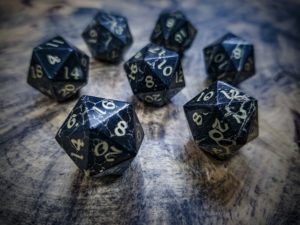 These particular dice, have been crafted from Jet and inlaid with Brass. Jet also known as lignite, derives its name from the French word, jaiet, and gives its name to the term, jet-black. Jet has been widely used as a gemstone since the Neolithic period and examples of jet jewelry have been found in Germany dating to 10,000 B.C. The Romans found a love of Jet in the 3rd century, but its use fell out of fashion until the Victorian Era once Queen Victoria herself adorned her mourning dress with jet after her husband’s, Prince Albert, death.

Jet despite its historical use as a gemstone, isn’t really a gemstone. Jet is in the same family as pearls and amber, since it is an organic material. Jet is formed from super compressed decayed wood mixed with a touch of salt water then cooked for eons in the warm bosom of Earth’s crust.