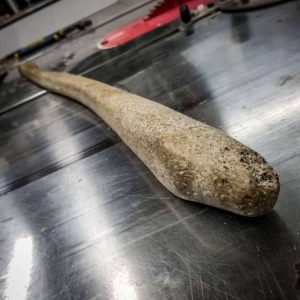 Lets talk about the penis. Or more aptly the penis bone aka the baculum. As humans it seems pretty strange to have a bone in your member, but to the rest of the animal kingdom, it’s well, business as usual because it turns out putting a bone in your boner makes sense from an evolutionary perspective. So much sense that scientists think the baculum has evolved over 9 separate times in mammals.  We humans are the weird ones relying solely on blood pressure to keep things erect. Why the difference? As humans we tend to mate more frequently with a single partner where as other mammals tend to mate once for longer durations. (Note: this is a VAST oversimplification as this topic is a rabbit hole whose depths far exceed the space allotted here) Having a literal stiffy means the males of these species can perform far longer than they could otherwise. 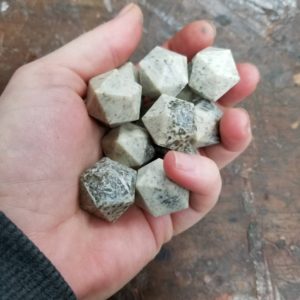 Humans have apparently been fascinated with penis bones for as far back as we have recorded history. In Hoodoo, folk magic of the Southern U.S., practitioners still wear raccoon baculum as a good luck charm. There are even scholarly articles written claiming that the Biblical Genesis story in which God creates Eve from one of Adam’s ribs was in fact not about a rib at all and was instead a euphemism for you guessed it, the penis bone, which we already know humans lack and it is some what shaped like a rib.

Oosik is a term used in Native Alaskan cultures to describe the bacula of many mammals that inhabit the frozen north. Chiefly among those are walruses, seals, sea lions, and polar bears. The oosik is a polished and sometimes carved baculum of these large northern carnivores. It’s one of the densest bones in a mammal’s skeleton and is used quite often in schrimsaw and tool making by the Inuits. These particular dice have been crafted from Walrus Oosik that has been resin stabilized, and are inlaid with Copper. A little over half the dice in this run came from walrus oosik, that was exhumed from an abandoned Inuit village.