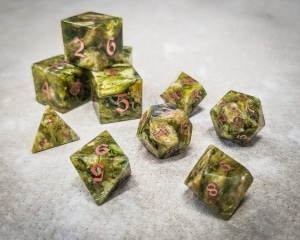 These dice have been crafted from compressed  hops then inlaid with copper. Hops was first used in beer sometime during the 9th century. Over the next few hundred years it would almost entirely replace the traditional gruit used to flavor what we now call beer. More on that in a minute because first we must discuss what exactly a hop is.

Hops aka Humulus Lupulus (the common hop) is a voraciously growing flowering vine in the Cannabaceae family. Yes that cannabis, they are distantly related, though it’s probably not a good idea to smoke a hop. The common hop plant is native to all continents in the North Hemisphere, Europe, Asia, and North America. It’s flowers are quite aromatic, and are know to attract butterflies. The female cone shaped seed pods are are of particular interest, as that is what is used to both flavor and preserve beer, thanks to it’s bitter flavor and anti bacterial properties. (This shall be of some importance later in the history of hops.) 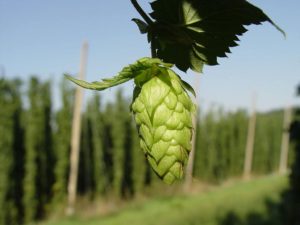 Before the rise of hops, gruit was used to flavor beer, or more aptly named ale. Though we use the name to mean a top fermented beer now, traditionally ales were brewed using gruit, whereas beers were crafted using hops. Hops gained popularity through out medieval Europe in at a slow meandering pace. It was aided in large part by German Protestants not wanting to pay the taxes levied on gruit by the Roman Catholic church and the use of hops would later become law in 1516 under the Reinheitsgebot or the German Purity Law. It was later accepted very begrudgingly in Great Britain purely on it’s preservation properties as hops’s anti bacterial nature kept beers from spoiling, though the English were not overly fond of it’s bitter flavor. the death nail in gruit’s coffin occurred in 1710 when Great Britain passed an Act forbidding the use of any bittering agent in beer other than hops. By the mid to late 17th century traditional ales had fallen completely out of favor and beer as we know it today had come to dominate. 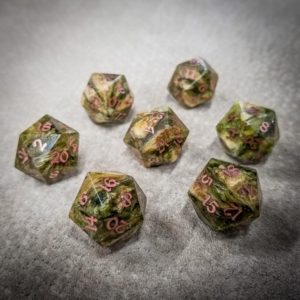 Each of these dice has been crafted from compressed hops and set in to a crystal clear resin allowing you to see in to the die as the light passes both through and around the fibers of the hops giving these dice a depth and complexity not seen in our other materials. Each die is then inlaid with copper.