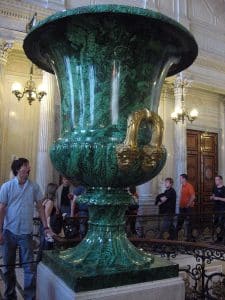 Malachite has been mined since the 3rd millennium B.C. and smelted for its copper content. That copper is what gives Malachite its noted green coloration. Ancient Egyptians associated its green color, known to them as wadj, with rebirth and fertility. They believed that the afterlife contained an eternal paradise know as the “Field of Malachite”.  Malachite, like Azurite and Lapis Lazuli, has been used as a pigment since antiquity, though it has more recently been replaced by its synthetic counterpart. Malachite is the second of the two copper carbonate minerals and results from the weathering of Azurite, which is why they are often found in deposits intermixed with one another. Both were melted down for the copper ore in antiquity, so it is fitting that we inlay these dice with Copper numbers.

3 reviews for Malachite Dice with Copper